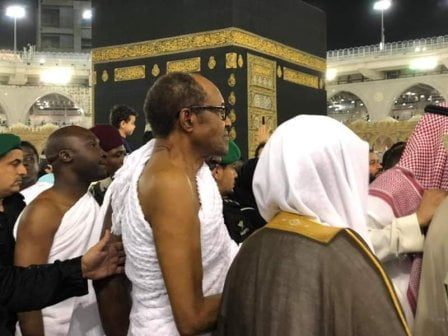 A storm of reactions by Nigerians has greeted a video of President Muhammadu Buhari running while performing the Lesser Hajj in Mecca (Makkah, the Kingdom of Saudi Arabia, has surfaced online.

Naija News recalls that President Buhari accepted an invitation by the King Salman Bin Abdulaziz, the ruler of Saudi Arabia and Custodian of the Two Holy Mosques to perform the Umrah (lesser pilgrimage) in the Kingdom.

Days after the invitation, pictures of the President and his wife Aisha performing Umrah (lesser Hajj) at the Masjid Haram (the Grand Mosque) in Makkah surfaced online.

The Personal Assistant to Buhari on New Media, Bashir Ahmad, shared pictures of the President in Makkah on his Twitter page with the caption: “President @MBuhari performs Umrah (lesser Hajj) at the Masjid Haram (the Grand Mosque) in Makkah, the Kingdom of Saudi Arabia.”

However, a day after the Presidential aide shared the photos of the President and his wife in Makkah, a video emerged showing President Buhari running while the Lesser Hajj.

The video shot by NTA and shared by many Twitter users shows President Buhari and his entourage break into some sprinting while performing one of the rites of the Hajj at the Masjid Haram (the Grand Mosque) in Makkah.

Moments after the video went viral, Nigerians took to the micro-blogging site to react to the video.

I saw President Buhari at some point running… The same man the opposition said he's not fit or are my eyes deceiving me? pic.twitter.com/rkIPTlPWTZ

The other time, it was walking briskly. This time, it’s running. The few times Buhari ever applied his limbs, it was for himself. pic.twitter.com/vZNiylLZui

have you watch the 40 year old Buhari video running in #Umrah ?? ?

Crass stupidity. If others were running and @MBuhari was walking, their headline will read like “Buhari is Sick”. It’s just a reflection of their hatred for PMB but it doesn’t deter the man. I will urge you not to block them yet let them keep being stupid they will be alright las

It seems that video of Buhari running is giving some people heartburn.

Is it really Buhari running like that while performing safa-marwa or Jibrin from Sudan? ?