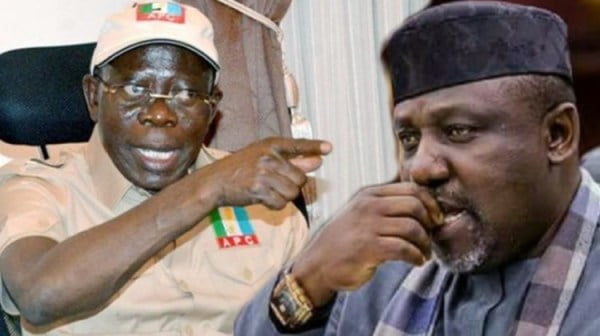 Chairman of INEC, Prof. Mahmood Yakubu, has dismissed claims by Gov Rochas Okorocha of Imo State that he was colluding with the National Chairman of the APC, Adams Oshiomhole, to deny him (Okorocha) his Certificate of Return.

Yakubu, speaking to the Independent Newspaper through Rotimi Oyekanmi, his Chief Press Secretary, said while it would not join issues with Okorocha, it was unfair for him to allege that he was colluding with the APC chairman to persecute him.

Yakubu also said since Okorocha had taken the matter to court, he should allow the courts to decide the outcome of the matter.

“INEC does not like joining issues with either political parties or their candidates. Our position on the Imo West senatorial issue is very clear.

“Our position is that we will not reward bad behaviour. People should have a conscience. It is very interesting that people will do what is wrong and still come out to accuse the other party that is innocent.

“But the fact is, the INEC chairman does not, and can never, collude with the chairman of any political party to persecute anybody. Not at all! We took a decision on that matter independently.

“In any case, this person you have just spoken about (Okorocha) has just gone to court. If you go to court, why don’t you allow the legal processes to run its full course?

“You cannot go to court and then be canvassing for one thing or another in the media. It’s unheard of. You have filed your case in court, so we will appeal to you to let the court handle the matter,” he said.