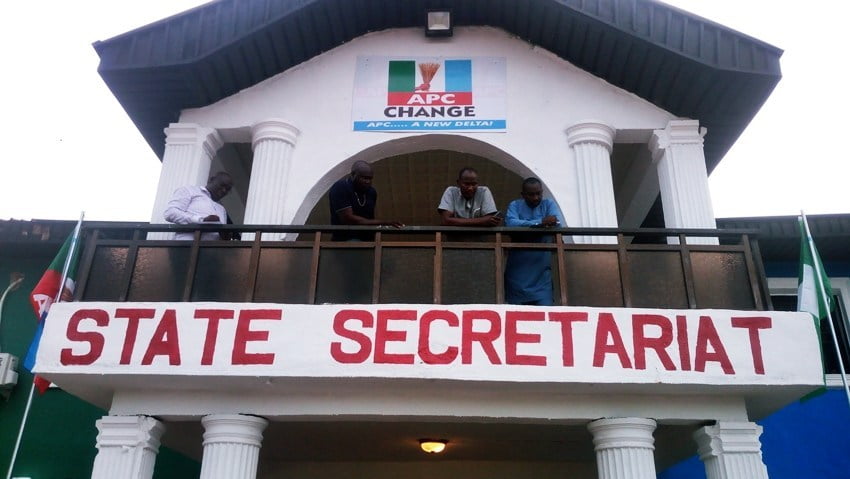 Suspected hoodlums on Wednesday night broke into the Ogun State Secretariat of All Progressives Congress (APC), located at Iyana-Mortuary, Abeokuta, and took away vital documents.

The state Chairman of APC loyal to Governor Ibikunle Amosun, Derin Adebiyi stated this on Thursday, while speaking to newsmen at the Secretariat over the development.

Adebiyi revealed that all the offices within the Secretariat were ransacked by the hoodlums.

He explained that the hoodlums also destroyed all air conditioners, television sets, and chairs in all the offices.

The APC chieftain stated that the air conditioners and televisions destroyed were only a decoy as none of them was taken away from the complex, but, documents were taken away.

He said, “The attack was massive and destructive. All offices were broken into including those of the chairman, the state secretary, the organizing secretary, among others.

“The attack witnessed vandalization of property, such as air conditioners, pumping machine, ceilings, chairs and television sets. The offices were ransacked while important files and documents were taken away.

“The intention of masterminds remains unknown, but, suspicious. This is because it is coming at the twilight of Governor Ibikunle Amosun’s administration that prides itself on eight years peaceful coexistence and security of lives and property.

“The Ogun State chapter condemns the incident in the strongest terms as barbaric and uncalled for. This trend is worrisome as it is believed that the incident targeted at destabilizing activities of the party as the governor winds down.

“We wish to state that the Ogun State chapter of APC is a peaceful and law-abiding political party. Our party believes in the rule of law and due process. In this regards, the party has reported the matter to the security agencies for investigation.”