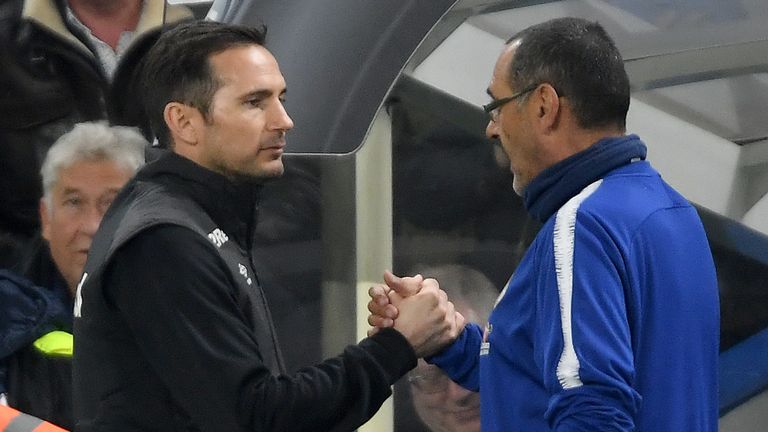 A report monitored on TheSun UK, quoted respected TV station Sport Mediaset,  to have said that the 40-year-old Lampard will return to manage his former club after his impressive spell with Derby County.

The report added that Chelsea will sack Sarri this summer – even if he guides the club to Europa League glory with a win over Arsenal.

Naija News understands that 60-year-old Sarri guided the West London club into the top four and led them to both the Carabao Cup and Europa League finals this season.

But despite the feat, it is believed that Chelsea owner Roman Abramovich will  get rid of him because he has a poor rapport with the fans.

The report noted that Lampard would be welcomed back with open arms by the Stamford Bridge faithful after he spent 13 glorious years with them as a player.

This online news platform recalls that Lampard made 648 appearances for the Blues and is still the club’s all-time leading scorer with 211 goals.

Since his retirement from playing, he has proved his credentials as a manager after an impressive season with Derby County, with the club having just a game to win and gain promotion to the English Premier League.

The ex-England midfielder has guided the Rams to the Championship play-offs after 20 wins and 14 draws in 46 games.

Lampard claimed earlier this week that Chelsea need to put their trust in youngsters which would be good news for the likes of Ruben Loftus-Cheek and Callum Hudson-Odoi, should Lampard get the gig.

“Of course it will be disappointing to lose him [Hazard] for the Premier League, but particularly Chelsea,” Lampard had said.