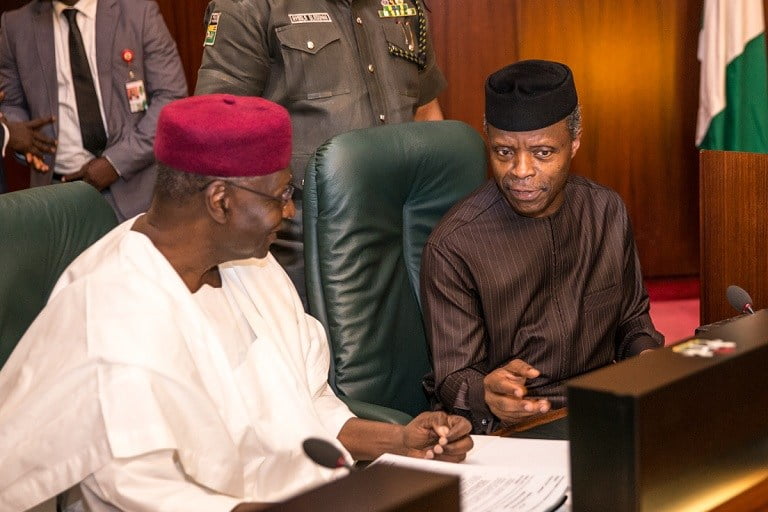 Vice-President Yemi Osinbajo on Monday mocked the Chief of Staff to the President, Abba Kyari, saying he behaves himself during the Ramadan fast.

Osinbajo made this known when speaking on behalf of members of the cabinet during a dinner to break the Ramadan fast at the Presidential Villa, Abuja, with President Muhammadu Buhari.

The Vice President said that regardless of ethnic and religion affiliations Nigerians must continue to be their brothers’ keepers and must work towards building a united nation.

On the Ramadan period, Osinbajo said: “Mr President I must say that there are some reasons I had always look forward to the Ramadan session. But some of those reasons are now being seriously challenged.

“The first of those reasons is that during the Ramadan meetings are usually very short. But, unfortunately, last Wednesday Mr President seemed to have destroyed that very good notion by taking us through the longest FEC meeting in the history of the Federal Executive Council.

“So, we shouldn’t expect anymore that meeting will necessarily be short during the Ramadan.

“So, I think that all we can truly expect now from the session is possibility what it was meant to do which is to remind us of some of our responsibilities to ourselves as brothers and to our fellow men/women especially our roles as leaders.

“I think is auspicious that this particular (end of) Ramadan falls at the eve of the new term in office.

“So, it is an opportunity for us to remind ourselves over the core mandates which is the welfare and security of majority of our people,’’ he said.

Speaking earlier, President Buhari disclosed that he warned Osinbajo, to always stay safe to avoid being mobbed during Trader Moni disbursement in markets across Nigeria.

Buhari also challenged the elite to do something very urgent to ameliorate poverty in the land.

“When I drive around the country what upset me very much is the status of our poor people in this country – you see young people, the so-called Almajiris with tore dresses, with plastic bowl. They are looking basically for what to eat.

“The question of education (to them) is a luxury. I think Nigerian elite we are all failing because I think we should have a programme that will at least guarantee some basic education for our people no matter how poor they are.

“So, I welcome the Vice-President initiate of the School feeding programme. If you check in your localities the enrolment into schools improved because a lot of children can get at least one good meal a day. This is the position of this country.

“This `market money’, I warned the Vice-President. I don’t like him to be mobbed, especially the way I see hefty women coming and confronting him, he should be very careful.

“These are very good initiates. Initially, I was quite reluctant but I must admit that they are very good programmes and they endear this government to a lot of poor people because of these N5,000 or N10,000 being given to them as loans.

“They are fantastic programmes and I have to admit quite honestly that the Vice-President was ahead of me by insisting on them.

“But he knows me if he insists I will say `okay go and do what you like.’ He did it and I’m very pleased as he is being very successful,’’ he said.