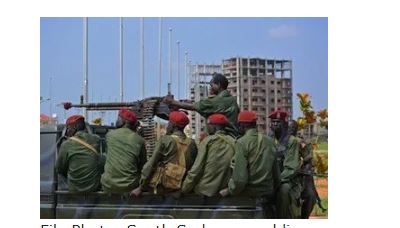 Six people were killed and dozens of others were injured when soldiers tried to break up a peaceful mass sit-in to demand a civilian government, the Central Committee of Sudanese Doctors said on Tuesday.

Naija News understands that the transitional military council, which is currently in charge of the country, however, denied attacking the protesters in front of the army headquarters of the capital, Khartoum on Monday night.

The sit-in has been taking place since earlier this year and was one of the main protests leading to the ousting of long-time President Omar al-Bashir.

“Outlaws’ who were trying to break up an agreement between the military council and opposition groups had staged the attack,” the council said in a statement.

“These parties have entered the sit-in area and sought to escalate incidents, including firing of bullets, security raids and causing provocation between regular forces and protesters,” the council said.

Among the dead was a military officer, while three soldiers were wounded, according to the statement.

The attack comes after protesters poured into the main streets of Khartoum on Monday to intensify pressure on the transitional military council to set up a civilian government.