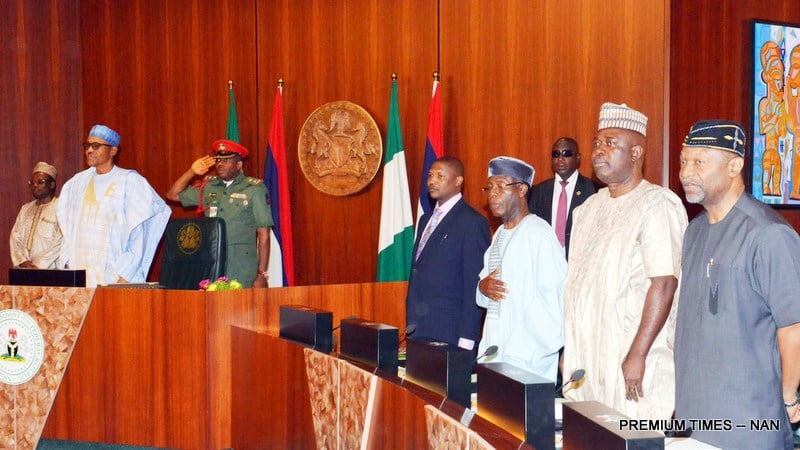 Former Presidential Media Adviser, Reuben Abati, has claimed that the current cabinet of President Muhammadu Buhari is the worst since Nigeria’s return to democracy in 1999.

Abati, in an article on Monday titled “The next Buhari cabinet: some suggestions”, urged the President to sack 80 per cent of minister and advisers for below average performance and that he must not cave in to pressure from APC leaders ahead of the appointment of those to work with him in his second term.

The former Ogun PDP deputy governorship candidate noted that Buhari is the only Nigerian President since 1999 who did not change his team mid-stream but that he should on the morning of May 30, 2019, or even on the 29th announce a new Federal Executive Council.

“Doing so will send a signal that he means business and that he has learnt some lessons since 2015… Nigeria expects that President Buhari would not take another six months to constitute another team,” he said.

Abati, who opined that the president may consider merit, competence, continuity, stability, reward for hardwork and loyalty, said this could have worked for the incumbent Governor of the Central Bank of Nigeria, Godwin Emefiele.

He wrote: “There are persons who believe that Emefiele has been donated a second term as CBN Governor because of his closeness to Aso Rock, his political astuteness (romancing the powers-that-be), including even going to the Mosque with the President, and pretending to know the Muslim way of worship. There are also those who argue that Emefiele deserves his re-appointment because he has been a major pillar of stability in managing Nigeria’s economic crisis.

“The CBN under his watch also introduced policies that helped to guide Nigeria through recession, create a special window for local and foreign investors, incentives for Small and Medium Scale Enterprises, farmers and the creative industry, astute management of the interest rate and lending regimes and a positive determination to sustain Nigeria’s economic growth recovery agenda.

“It is my firm belief that by retaining Emefiele, who was originally appointed by the Jonathan administration in 2014, President Buhari has in this instance, risen above emotionalism to opt for stability, merit and continuity. Local and international investors and other stakeholders are easily disoriented by an unpredictable change which increases risk calculations. The re-nomination of Emefiele will give them confidence.

“The appointment of Ms Abike Dabiri-Erewa as Chairperson of the Diaspora Commission is a reward for hard work and loyalty, and it is well-deserved. Appointed Special Assistant to the President on the Diaspora, Abike-Dabiri has shown commitment and dedication beyond the call of duty. Her passion is remarkable. Her courage is commendable.

“Wherever any Nigerian in the diaspora found himself or herself in distress, Ms Dabiri-Erewa reached out on behalf of the Nigerian Government. She became so effective her detractors began to grumble that she was upstaging the Minister of Foreign Affairs. My view is that she probably would have been a better choice as Minister of Foreign Affairs, but the Diaspora Commission being her baby and passion, she is probably better off.”

The veteran journalists also added that Nigerians expect Buhari to show more independence by doing away with the so-called cabal that has held him hostage since 2015.

“But what do I think? I think the cabinet that Buhari has worked with so far is the worst that Nigeria has had since 1999 and I am just being charitable, saying this. Not even under Sani Abacha did we have such a terrible mix. In a country of extremely talented and resourceful persons, the Buhari cabinet, 2015 -2019 is a scandal. Obviously, after the 2015 elections, President Buhari was under pressure to settle IOUs and give jobs to the boys who helped him to fulfil his dream.

“So, from every part of Nigeria, they gave him the boys to do the job and he too picked some prominent hangers-on and long-time loyalists. You can’t run a good government by recruiting family members, ethnic bigots, party financiers and a bunch of clueless politicians. President Buhari must not repeat that mistake, whatever the pressure.

“He should ask for CVs, conduct interviews by himself alone, and he must reverse this trend of sending names to the National Assembly without portfolios, and avoid the error of appointing dead persons! Whoever is going to appear before the Senate as Ministerial nominee must also have a portfolio attached to his name. It is a bad thing to have a Minister presiding over a portfolio over which he is ill-suited.

“President Buhari should sack more than 80% of his team. They have not served him well with their open and embarrassing display of lack of colour, grace and competence. For a start, all the Ministers of State should be fired and changed. They cannot plead that they are mere spare tyres. It is their lack of initiative and ambition that has turned them into spare tyres. Heads of agencies and parastatals should not be allowed to hang on to the myth that they are occupying tenured positions.

“The President is constitutionally empowered to fire anyone when he is tired of their services. Many of them should be sent home and that includes the horde of special assistants and advisers doing nothing, occupying space and often causing problems. President Buhari should ignore any and every list from the party secretariat. APC party leaders are busy with their own private agenda.

“But there are definitely persons in President Buhari’s team that he can still work with, who in our estimation can add value. Okechukwu Enelamah should make the list. He is the current Minister of Investment, Trade and Industry. His sterling performance linking government policy to SME performance and articulating the forward-looking policies of the Buhari government made me to take a second look at his record.

“There are people like him around President Buhari who are often overlooked because they don’t know how to make noise or show up sycophantically at the mosque. Under Enelamah’s watch, Nigeria’s ease of doing business ranking has improved, and he has sustained the legacies of his predecessor in that office – Olusegun Aganga – and has also decently refrained from playing politics with plain-sight progressive ideas.

“I also recommend Babatunde Fashola, SAN. He deserves to be retained not because he has tactically lobbied for it but because he is a man of discipline and talent. President Buhari overburdened him by giving him three Ministries. I don’t think Fashola can easily multi-task. Minister of Budget and National Planning, Udoma Udo Udoma is a very competent man but he is in the wrong Ministry. President Buhari can try him elsewhere, in a position best suited to his talents.

“Audu Ogbeh, the Minister of Agriculture and Rural Development should be given a high national honour and advised to retire. Lai Mohammed, the Minister of Information has outlived his usefulness, like Chris Ngige and Rotimi Amaechi. Professor Isaac Adewole, the Minister of Health, still has a lot to deliver. Who else is in this their government…?”