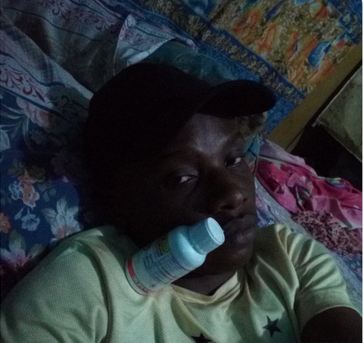 A storm of reactions has greeted a suicide attempt by a  Nigerian student identified only as Segun over the recently released Unified Tertiary Matriculation Examination (UTME) conducted by the Joint Admissions and Matriculation Board (JAMB).

Naija News had reported earlier that Segun attempted suicide on Sunday night, by drinking sniper over a low UTME result.

This online news platform recalls that JAMB released results of 1,792,719 candidates who sat for this year’s UTME on Saturday, May 11, exactly twenty-two days after it conducted the examination.

Similarly, the board withheld the results of 34,120  candidates for various infractions. JAMB Registrar, Prof Is-haq Oloyede broke the news to journalists on Saturday in Abuja, Nigeria’s capital.

However, on checking the recently released UTME, Segun, who had said in a thread on Twitter that his real name is Victor, discovered that he scored a total of 167 marks.

Apparently displeased with the score, the Nigerian student took to the micro-blogging site, Twitter, to reveal that he would commit suicide with sniper by 9 pm on Sunday, May 12.

“It is now when people want to send me to school that I will now score 167 in UTME?

“Meanwhile, I will be teaching y‘ all how to make tea with sniper by 9 pm live on Twitter… Tune in.

“This thing go sweet oo. Y’all should at least make it fun for me by 9 pm pls. Tune in and wish me luck,” he wrote on Twitter. 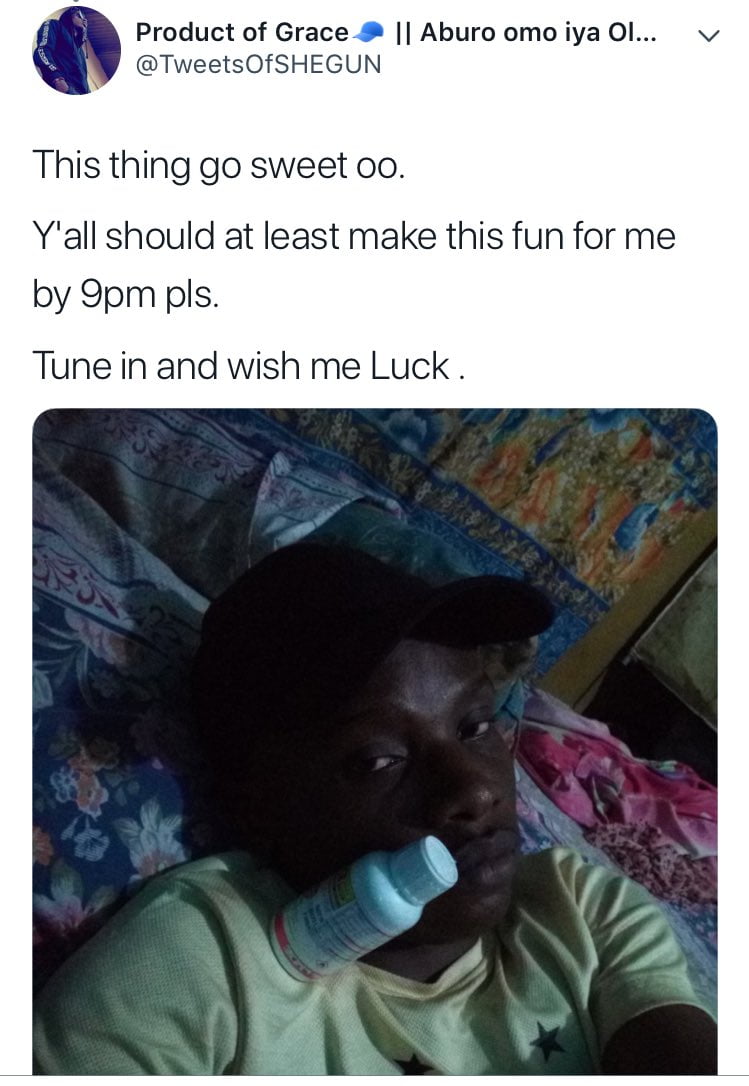 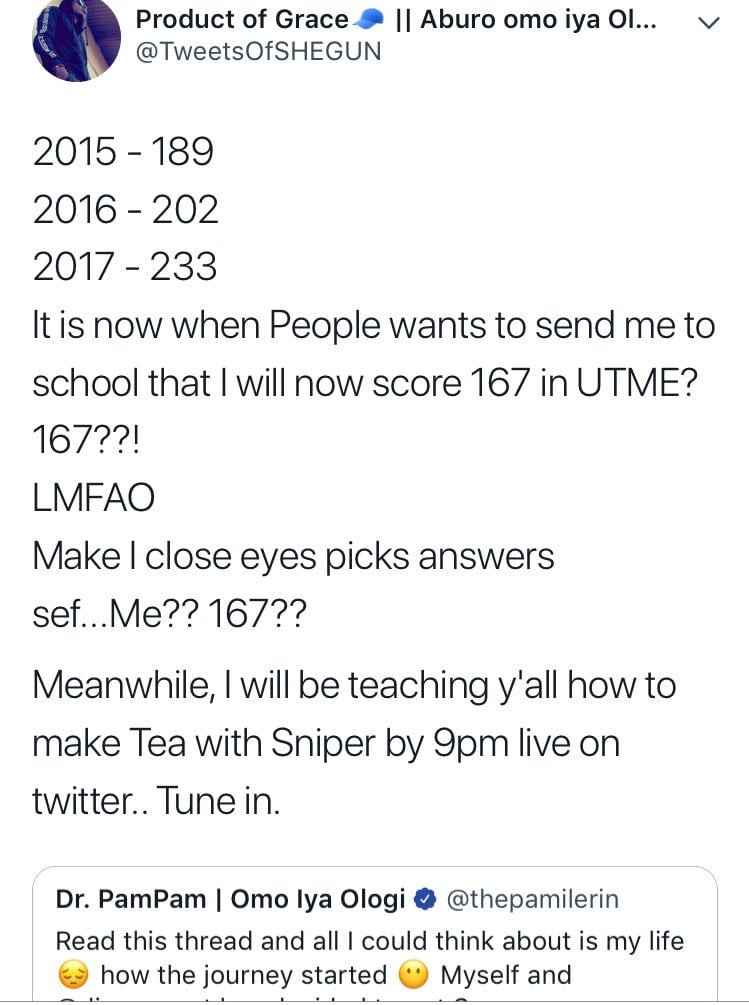 Although it is unclear if Segun streamed the attempted suicide but tweets monitored by Naija News late Sunday, tilted to that angle.

Giving an update on Segun’s health after he took the sniper, social media influencer, Pamilerin, tweeted: “Segun has been found, yet to respond to treatment but With God, he will survive this.”

Segun has been found, yet to respond to treatment but With God, he will survive this.

Another twitter user @Otunbakush gave an update, noting that Segun is at “the hospital at Ijebu Ode,” Ogun state, southwest Nigeria.

Similarly, Another twitter user @dipo_smart wrote: “Guys, thank you for all the love and concern. Segun is alive and receiving treatment. @thepamilerin will go and see him first thing in the morning. We will keep you updated. Today has shown me that it is really more than just Twitter.”

Guys, thank you for all the love and concern. Segun is alive and receiving treatment. @thepamilerin will go and see him first thing in the morning. We will keep you updated. Today has shown me that it is really more than just twitter ??

Displeased with the development, Nigerians took to tweet to air their opinions with many calling on others to pray for Segun over his current health situation.

Naija News captured some of the reactions…

Segun attempted suicide by drinking sniper. God save him. I will block a lot of people that tweeted rubbish in the morning.

“Suicide is not the answer”
“Why kill yourself cos of jamb?”
People, these are cruel comments.

Every human has a limit.
You are only as strong as your toughest challenge. And until you face what will break you, you would think nothing can break you.

I pray Segun survives this.

People actually experience depression, Segun was suffering from severe depression, and he never confided in anyone.

Please monitor people around you, pray for segun too

NOT EVERY SMILE IS REAL

SEGUN HAD FRIENDS, NEIGHBORS
FAMILIES BUT NO ONE SEES BEYOND OUR SMILE.

Segun na chocolate be the way no be snipper ? pic.twitter.com/AbAsbTBKUe

Ok, let’s put it like this, I don’t like those nailing the Segun boy to the wall, but we all go through shit, everyone does.

I wrote JAMB more than 5times, as at that time, my cousins were already going for their second degree.

Did odd jobs to eventually send myself to the UNI

Ok, the rate at which young people commit suicide these days by drinking sniper is alarming.

Suicide is never an option or a solution.

A ban should be placed on sniper!! pic.twitter.com/QXOtzlG6Nf

No one is forcing you to pray for segun but don't be stupid.Don't go this low to prove you had a bad upbringing. pic.twitter.com/iNadAf10gS

After Segun wakes up and has finally recovered. … pic.twitter.com/jzUx1RvtST

All you can do for Segun is pray for him and not tell us how you failed JAMB 10times and calling him names. People are different, some people get a big heart and some don't.
Just Pray for him, it is the little you can do.

Segun’s story is touching. I pray that God spares his life ??

Segun got devastated after seeing his Jamb’s result that he planned his suicide! Read ?? pic.twitter.com/wiG4dgfSXT

I was crying and vomiting because of Segun,someone I don’t know…I understand just because our stories are similar and I know what it means to be suicidal.I am 24 and in 200 level because life showed me pepper,I hope he survives this ??????

Suicide is not an option. It’s sad that Segun tried to kill himself because of Jamb. After Jamb there is Post-Jamb. After Post Jamb there is still a lot of work to do in the University. Nothing is easy, just keep working day after day.
DO NOT TAKE YOUR LIFE!!! I hope he’s okay??

I'll just mute everything regarding segun and pray he'll be fine.

But the truth is alot of you are disgusting hypocrites, senseless and selfish morons with zero empathy and the emotional intelligence of a gold fish

Someone's mental health is not about you!#BeMentallyAware

If Segun survives he needs to be beaten, because of jamb you want to kill yourself, you'll gain admission, graduate and probably not feed with the certificate self… Suicide is not an option let's be guided.