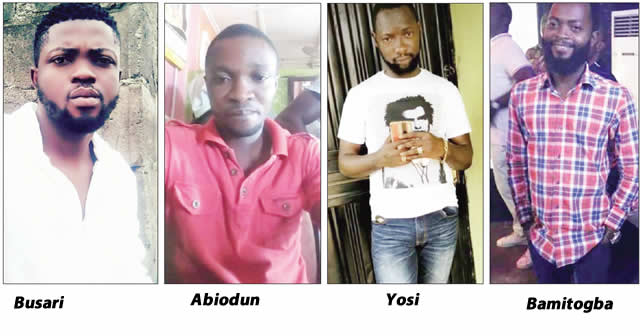 The environs of Ikorodu Local Government Area of Lagos State, has been thrown into disarray after five people were reported killed in a fight between suspected members of the Eiye and Aiye cults.

Some residents of the area while speaking with Punch, identified the victims as Oladipupo Bamitogba, Yosi, Ibrahim Abiodun, Sesan and Rasak Busari, aka Aro.

They further stated that two of the victims in the attack, Bamitogba and Yosi, were not cultists but victims of circumstances.

A witness, who identified himself as Lateef Adbullahi stated that Bamitogba, an accountant, was shot and cut with machetes around Adaraloye area of Ikorodu on May 6, 2019.

He stated that the victim died after he ran out of oxygen when the ambulance which was conveying him to the Lagos University Teaching Hospital ran into gridlock.

Another witness who spoke on the incident, Saliu Balogun, stated that Yosi was killed when hoodlums attacked Isele area around 9pm last week Sunday and missed their target.

He said, “Around 9.30pm, the cult members came to kill one of their opponents. When they got to the area, they opened fire on the target. The target escaped, but bullets hit Yosi and another man. They ran after the target. When they could not get him, they returned to where Yosi was lying down and stabbed him. He died at the Ikorodu General Hospital, but the other victim survived.”

The third victim in the attack, Abiodun, was reportedly killed during the day.

A resident who was identified as Lola Sunday, stated that the hoodlums opened fire on Abiodun before attacking him with machetes.

Sunday said, “We ran inside immediately they started shooting at him; we peeped through a hole in the gate and saw two guys with an axe and a gun. After killing him, they took a snapshot of his corpse and left. It was when the police came that Ibrahim (Abiodun) was identified as a cult member.”

Another resident of the area who did not give his name, stated that Sesan was shot dead last Tuesday around 8pm.

Further report revealed that Sesan was killed near his house in the Itunmoja-Itunpate area of Ikorodu.

He said,“We were praying in the mosque when we suddenly heard gunshots; we didn’t finish the prayers because everyone took to their heels. It was when we came back that we realised that Sesan had been shot dead. From what we heard, the people who killed him were cultists. We don’t know if he was a cultist or not; but ever since the incident happened, we have been leaving early for safety.”

Thomas Badmus who spoke on the death of the fifth victim, Busari, stated that he was murdered on the day he plan on traveling out of the country.

He said, “I knew Rasak (Busari) because we stayed in the same area. He was a notorious cult member who had attempted to kill a rival cultist on Saturday. The guy escaped and went to mobilise members of his faction.”

“On Sunday, Rasak was warned about the impending danger, but he ignored it. He made an attempt to run when they eventually came, but it was too late. About seven cult members chased and caught up with him in front of his house, where he was stabbed to death with a dagger.”

“This is a residential area and shops have not been opening because people are scared of a reprisal. We heard that Rasak was to travel abroad on the day he was killed.”

Olanrewaju Olabinjo, the provost Marshal of Onyabo, a neighbourhood watch outfit, stated four suspects in connection with the killings has been arrested by his men.

He stated that most of the attacks were carried out by hoodlums his group had arrested in the past but got released by the police due to lack of evidence.

Olabinjo said, “I will describe the people carrying out these attacks as miscreants and not cult members because when we had a peace talk, the so called cultists the Eiye, the Aiye and the Alora members came together to renounce their membership. This was in the presence of a former Commissioner of Police, Edgal Imohimi, a representative of the AIG Zone 2, obas, chiefs and religious leaders in Ikorodu. So, no one can say why they have started killing one another again.”

“We know these cult members personally; we know their parents and their hideouts; we need financial, moral and physical support of the Lagos State Government to bring them to justice.”

“From 2018 to date, we have arrested over 250 cultists and handed them over to the police. Some were prosecuted, but to our surprise, one or two weeks after the prosecution, they were released because the police claimed that they did not have any evidence against them.”

DSP Bala Elkana, the state Police Public Relations Officer, while speaking on the attacks stated that the commander of the anti-cultism unit of the command had been deployed to the area to restore normalcy.

He stated that suspected cultists handed over to the police by security operatives were usually freed due to lack of evidence.

Elkana said, “Ikorodu is well known for cult activities and we have deployed our resources there. In fact, the commander of the anti-cultism unit was asked to lead a team to Ikorodu to confront them.

“As I speak to you, there is an ongoing operation in Ikorodu; we have arrested over 20 suspects for cult-related issues and we are not stopping until we sanitise the area.”

“Also, we have been educating neighbourhood watch members that there are points to prove an offence. You don’t just arrest someone and tag him a cultist, there must be evidence to show; there must be records and testimonies of witnesses. There are things that you must establish before that person is arraigned. We usually charge the cultists they bring to court; they are out because of insufficient evidence. We want them to know that while making an arrest, they should also get enough evidence that will stand in court.”