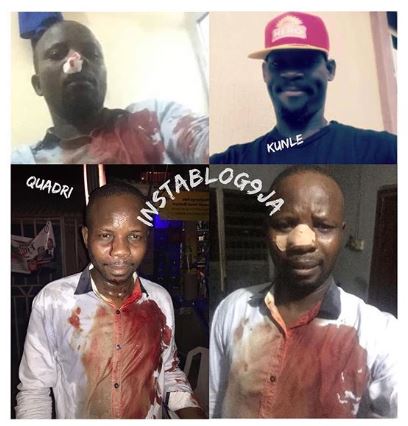 A staunch supporter of the All Progressives Congress (APC) identified as Babatunde Quadri was on Saturday attacked over his support for the president Muhammadu Buhari-led administration.

Naija News understands that Quadri as attacked by youths on his street who had warned against him posting contents in favour of President Buhari and his administration.

It was learnt that Quadri was attacked after he posted a content on Facebook where he applauded President Muhammadu Buhari but criticized the opposition Peoples Democratic Party (PDP).

Apparently displeased with his comment on Facebook, Kayode Abiola who is popularly known in the area as Kay Nana approached Quadri and attacked his nose with a sharp object, chopping his nose while he bled profusely.

The attack was said to have happened around the Cele Bus Stop in Lagos.

Quadri in a statement obtained by Naija News narrated the attack against him as thus; “I was with some friends when he approached me. He said he wasn’t happy with my activities online and he hit me in the nose with a sharp object.

He threatened to deal with me and my family ruthlessly. I’ve already reported the case at Afonka Police station, Shasha, Lagos.”

Quadri added that Kayode has always been telling him he would get beaten because of Buhari and now he has achieved his aim.