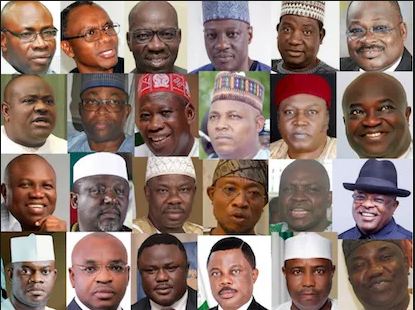 A state governor is in trouble for allegedly withdrawing about N100billion from his state’s Joint Local Government Account (SJLGA) under the guise of addressing security challenges.

Much of the funds was withdrawn in cash on the orders of the governor, The Nation gathered on Saturday.

The alleged fraud was uncovered by the Nigerian Financial Intelligence Unit (NFIU) following suspicious transactions by the governor.

The banks which facilitated the withdrawals have been assisting security agencies, especially the NFIU, on how the fraud was perpetrated.

Sources said an ongoing investigation by the NFIU has shown widespread abuse of the State Joint Local Government Accounts (SJLGA) by state governors.

The development was said to have informed the decision of the NFIU to ban banks, governors other financial institutions, public officers and relevant stakeholders from tampering with the statutory allocations of Local Government Areas from the Federation Account.

Although new financial guidelines by the NFIU will become effective from June 1, the agency has already put all the banks on alert to forestall last-minute withdrawal from the Joint Account by governors.

According to a reliable source, the NFIU has retrieved a table of massive withdrawals by state governors from the joint account (SJLGA).

The source said: “of all the instances at hand, we have a case of cash withdrawal from a joint account which was as much as N100 billion by a governor. This is a state with all sorts of insecurity.

“About N10billion out of the N100billion was recently withdrawn in suspicious circumstances.

“We have shared the intelligence with all relevant agencies. We cannot allow the trend to continue at all because whatever we are doing have global implications. Some agencies are already handling the case of the said governor.

“The NFIU has tightened the noose on some complicit banks. Before the international community comes talking to us, we have decided to act with the issuance of new guidelines.

“Remember that all these electronic transactions are regulated worldwide, they have a worldwide connection. They are seeing it; they are not just coming to Nigeria simply because they just want to blacklist us for blacklisting sake.

“So, rather than sacrifice the entire system, we sacrifice individuals and organizations involved, who are committing these crimes, and we will do that.

“Our findings are not empty, these documents are not empty, we attach with proves of structured massive withdrawals all amounting to money laundering, which is our responsibility to stop.”

The source said the NFIU will fully monitor compliance with the new guidelines on financial transactions by local governments.

The source added: “The volume of transactions from the account doesn’t matter; we have ways of how money laundering can be detected.

“Even if the guidelines do not work, we will do everything to make the banks comply because our main concern about Local government account is the corruption aspect of it, money laundering, terrorism financing and proliferation of weapon.

“We are prepared to face the task, we have options in stages on how to handle the issue at hand but if it gets apparent that our national security is threatened, we go international and blacklist the banks.”

The source said the agency will take all precautionary steps before wielding the big stick on banks collaborating with governors to syphon local governments’ funds.

Continuing, the source said: “We intend to be friendly with the banks with the assumption that they will implement the guidelines but if the banks refused, they will be blacklisted internationally.

“We will not allow the country to be blacklisted, instead we will sacrifice the banks and the individuals involved.

“We didn’t put this in the guidelines because once we blacklist anyone or bank, it appears real time in over 160 countries that are linked to the system.

“This is a system that politics don’t come to play. You can play your politics anywhere but you can’t bring politics into NFIU because once a name is on the system, it’s global and fingerprint scrambled internationally immediately.

“Beyond that, we are facing a lot of international pressure from the international financial system to isolate and blacklist the entire country on account of several violations that are going on within the country.”

On the constitutionality of NFIU’s action, the source said: “We have instruments within our law and we’ll work with the Federal Ministry of Justice on the implementation of the new guidelines.

“Previous issue of contention between the federal government and the governors was about control of funds, and not within the context of money laundering, terrorism financing issues among others, which are our exclusive mandate.

“Constitutionally, the governors do not have powers to do anything with the joint account other than collection and distribution. The account is not for transactions to pay individuals or companies.”

“That is the reason for the guidelines, which was based on the conviction that there’s nowhere in the constitution where the Local Government Account was designated as a transaction account.

“The situation today is that the Local Government system is completely dead but we need to change the trend and that is why the cooperation of everyone is needed.”

The NFIU had on Monday unveiled the new guidelines in Abuja.

The complete copy of the guidelines has been released to the Governor of the Central Bank of Nigeria, the Chairman, Economic and Financial Crimes Commission (EFCC), the Chairman, Independent Corrupt Practices Commission (ICPC) and Chief Executive Officers of all Banks and other financial institutions.

A statement by the Acting Chief Media Analyst of the NFIU, Mr. Ahmed Dikko explained in details the steps taken to protect local government allocations.

The statement said: “The NFIU requests all financial institutions, other relevant stakeholders, public servants and the entire citizenry to ensure full compliance with the provisions of the guidelines already submitted to financial institutions and relevant enforcement agencies including full enforcement of corresponding sanctions against violations from 1st June, 2019.

“Having realized through analysis that cash withdrawal and transactions from the State Joint Local Government Accounts (SJLGA), poses biggest corruption, money laundering and security threats at the grassroots levels and to the entire financial system and the country as a whole, decided to uphold the full provisions of section 162 (6) (8)of the 1999 Nigerian Constitution as amended which designated ” State Joint Local Government Account into which shall be paid allocations to the local government councils of the state from the federation account and from the government of the state.”

“In addition, taking such measures was necessitated by prompting reasons on the NFIU to respond to threats of isolating the entire Nigerian financial system by other International financial systems due to deficiencies in our anti-money laundering and counter-terrorism financing implementation and measures.

“Therefore, it is no longer possible to allow the entire system to suffer the deliberate and expensive infractions or violations by public officials and/or private business interests.”

“In addition, a provision is also made to the effect that there shall be no cash withdrawal from any local government account for a cumulative amount exceeding N500, 000:00 per day. Any other transaction must be done through valid cheques or electronic funds transfer.”