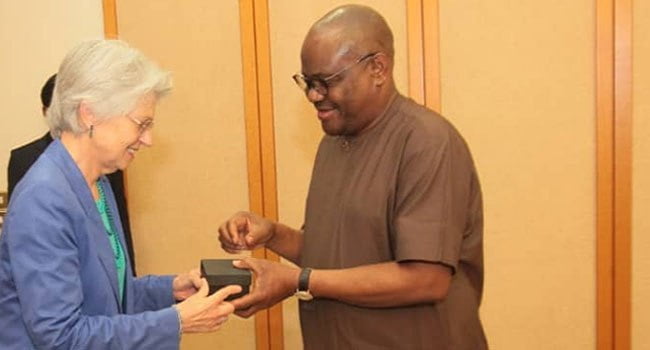 Rivers State Governor, Nyesom Ezenwo Wike has tabled before the Charge D’Affairs, Embassy of Netherlands, Mrs Marian Van De Cappello, matters of insecurity as it concerns Nigeria and the state he governs.

Naija News understands that Wike told Mrs Marian about the security challenges experienced in some parts of the country when she visited the government house in Port Harcourt on Wednesday, May 8.

Wike during the visit of the Charge D’Affairs, Embassy of Netherlands, told Mrs Marian that the security matters in the country is not unconnected with politics as he claimed that the politicisation of security in the country is responsible for the insecurity across the country.

He said: “The problem we have is the politicisation of security. As an opposition state, once we have security challenges, politics is introduced.”

In his meeting, he urged the Government of Netherlands to give Rivers State the support to tackle insecurity in the state.

While accusing some of these companies, the Rivers state governor said; “Shell is part of the major culprits. Shell divides communities to make sure that the people don’t work together. Shell don’t want to implement memorandum of understanding signed with communities.

“I sat in a meeting with Shell, Agip and Total. It was Shell only that refused to implement the Memorandum of Understanding. Despite the actions of Shell, we shall continue to protect national assets.”

Governor Wike said that he remains committed to all his campaign promises, saying that he will work towards fulfilling them during his second term.

On her part, Mrs Marian Van De Cappello congratulated the Rivers State Governor on his well-deserved victory during the Governorship Election.

She commended the Rivers State Governor for initiating reconciliation between political gladiators in the state.