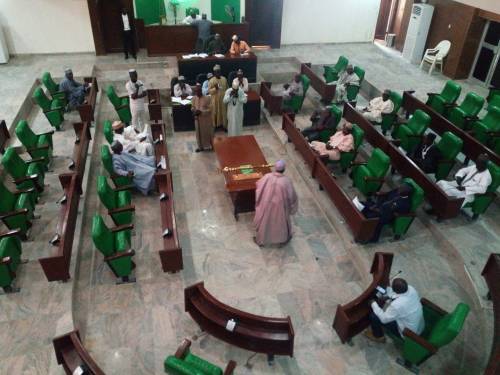 Naija News had reported that the Jigawa Assembly Thursday morning impeached the principal officers, accusing them of misconduct and abuse of power.

The emergency meeting, which was earlier scheduled to take place around 12:00 noon, was rescheduled to 9 am and a venue known only to those who are in support of the impeachment.

Recall that on January 3, 2017, Speaker of the Jigawa State House of Assembly, Idris Garba was sacked over alleged high-handedness and abuse of power.

Speaking to newsmen shortly after the impeachment process, the new speaker promised to run an open-door policy and solicited members' support and cooperation on any decision.

He explained that his re-election for a second term as a speaker was an indication that the House has confidence in him to clear all problems in the house.

Problem started at the Jigawa State House of Assembly on Tuesday over an attempt to amend the 2015 House Standing Rule.

Trouble started when the then Speaker of the House, Alhaji Isa Idris, announced the decision to amend the house standing rule that stipulates that all former assembly speakers and deputy speakers‎ cannot vie for the position of speaker again in subsequent assemblies.

The proposed amended rule will also disqualify any principal officer that was suspended or impeached from re-contesting for the position of Speaker.

The move to amend the 2015 House Standing Rule was viewed as an attempt by the house leadership to prevent the impeached speaker from contesting for House leadership in the forthcoming constitution of the seventh Assembly leadership.