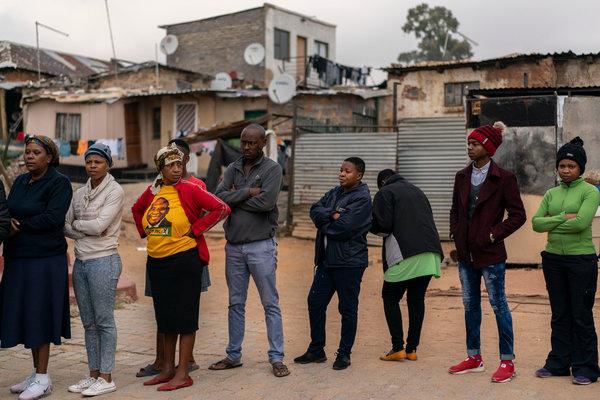 South Africans voted in large numbers on Wednesday in legislative and regional elections that the African National Congress ( ANC ), in power since 1994, should win despite unemployment, corruption and poverty that plague their country.

The country’s 23,000 polling stations closed at 21:00 local time (19:00 GMT ) after hosting millions of voters throughout the day without any significant incident, the electoral commission ( IEC ) said.

The counting has immediately begun and is expected to deliver significant first results on Thursday.

The polls promise Nelson Mandela’s historic party to retain an absolute majority of seats in the National Assembly, a new presidential term for its number one Cyril Ramaphosa.

The outgoing head of state voted late in the morning in his hometown of Soweto, a suburb of Johannesburg, amidst a rush of supporters and journalists.

“I am passionately confident the nation and our people are excited to vote,” said Cyril Ramaphosa, promising “new dawn, a fresh start, a new hope” to the many disappointed of his party.

Winner of all the polls that followed the fall of apartheid and the advent of democracy a quarter of a century ago, the ANC has seen its popularity plummet under the reign of scandals of its predecessor Jacob Zuma (2009). -2018).

“The ruling party did nothing for twenty-five years,” said Luzuko Bota, a voter in the Gugulethu slum in Cape Town. “We are still living in slums”.

In the local elections of 2016, the ANC achieved its worst national score by garnering 54% of the vote, giving, in addition, the control of cities like Johannesburg and Pretoria.

The polls credited the ruling party with 51 to 60 percent of the vote, less than the 62.5 percent won in the 2014 elections.

Since taking over the party and the country a little over a year ago, 66-year-old Cyril Ramaphosa has recognized his party’s “mistakes” and promised to eradicate corruption and revive the economy, which suffers from sluggish growth since the 2008 financial crisis.

Regarded as honest, pragmatic and competent, the former unionist turned millionaire, a time considered Nelson Mandela’s appointed dolphin, has apparently managed to limit the decline of the ANC.

“He is by far the most popular candidate,” says analyst Collette Schulz-Herzenberg of the University of Stellenbosch.

But, throughout his campaign, he was confronted with the disappointment, even the anger of a disenchanted country.

Unemployment has reached endemic proportions (27%), corruption has reached the highest peak of the state, and social inequalities and poverty are deepening. Last year, a resounding World Bank report even made South Africa “one of the most unequal countries” on the planet.

The opposition did not fail to highlight these failures and urged voters to turn the page.

The boss of Fighters for Economic Freedom ( EFF ) Julius Malema, 38, for his part, advocated a “revolution”, including the expropriation without compensation of lands still held by the white minority.

“If you need change, EFF is the solution,” said their “commander in chief” after slipping his ballot into an urn in his hometown of Sheshogo (northeast).

Despite this favourable ground, however, the two parties do not seem able to bring down the ANC.

As for EFF, they have the wind in their sails among the young and the poor and could double their score of five years ago. But their radical discourse should not allow them to exceed the 15% mark.

The only surprise of the poll could come on Wednesday regional elections, where the ANC is threatened in several provinces.

Whatever the score achieved by the ANC, the task of Cyril Ramaphosa looks delicate. Analysts predict the worst of the difficulties he will face in carrying out the reforms he has promised to revive the economy and clean up the state of corruption.

Blame the Zuma clan, they anticipate, still powerful within the party. “The ANC that we presume is victorious will not rise to these challenges because of its internal divisions,” says Lumkile Mondi, from the University of the Witwatersrand in Johannesburg.

The future president, elected by the deputies, 400 in number, will be invested on May 25.