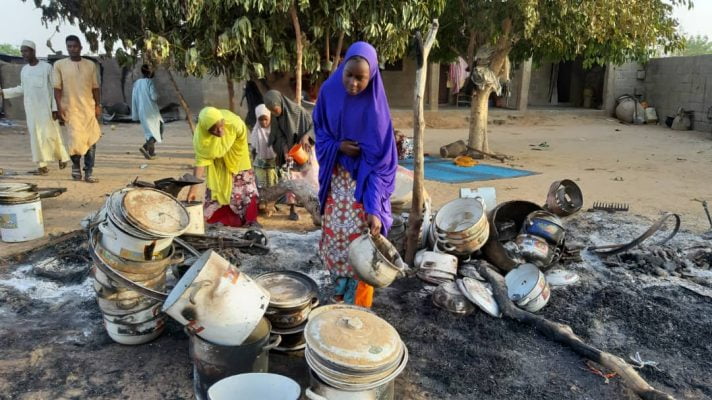 The incidents happened in Molai general area in Jere local government area of the state.

Naija News understands that this is as gunmen attacked Bala community in Sokoto State, leaving the Traditional ruler of the community shot dead, yesterday evening.

More than a hundred people have also been left homeless as the terrorists burnt down over a hundred houses in Maiboriti and Molai villages as well as the military checking point in the area, witnesses confirmed.

A resident, Mallam Isa Kagama, disclosed that they lost seven local residents to the attack.

“At least 10 persons were killed including soldiers, 3 civilians at Maiboriti village and 4 persons equally lost their lives in Molai. “We have witnessed high level of devastation like never before; they destroyed the power transmission plants that supply the whole of Maiduguri; just look at our homes, they have rendered us homeless,”Mallam Isa said while weeping profusely.

Molai, which is about 4 kilometers away from Maiduguri, the state capital, has suffered severe attacks from Boko Haram terrorists in recent years, Daily Trust reports.

The military had earlier claimed that they repelled the attacks on Molai general area.

However, witnesses said the destruction unleashed on innocent civilians by the insurgents was bad. They claimed the attackers walked freely in the village while the raid lasted.