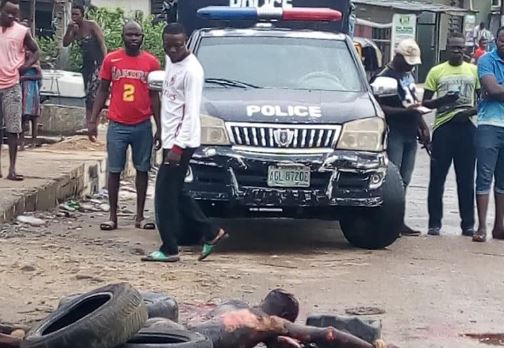 An angry mob in the wake of Monday set a suspect ablaze in the Somolu area of Lagos state.

Naija News understands that the suspect was set ablaze when he and his gang of 3 invaded a church in the area with the aim of stealing items from the church.

They were said to have already accomplished their task but were accosted by the mob on their way out of the area.

Upon apprehension, the robbers were said to have fled while the victim of jungle justice was said to have stood confidently with the aim that his charm would rescue him.

The members of the mob in the area scrabbled for tires from the streets and got containers of fuel, emptied the fuel on the suspect and ignited a match stick against him.

The suspect was shocked that his charm could not save him as he helplessly burnt to his death.

The Police operatives in the area were said to have arrived the scene late. An eyewitness report says that the Police had tidied-up the remains of the suspect.

“This thief was burnt to death this morning in my area, here in Somolu. They were 3 who came all the way from Oshodi to rob a church very early this morning on their way leaving pushing the stolen items, people sighted them and 2 of them flee away and this very guy stood with confidence while people were getting close think his juju will save him.

But unfortunately his juju couldn’t save him from petrol and fire, later the police and ambulance came cleaned him up and took him away.”