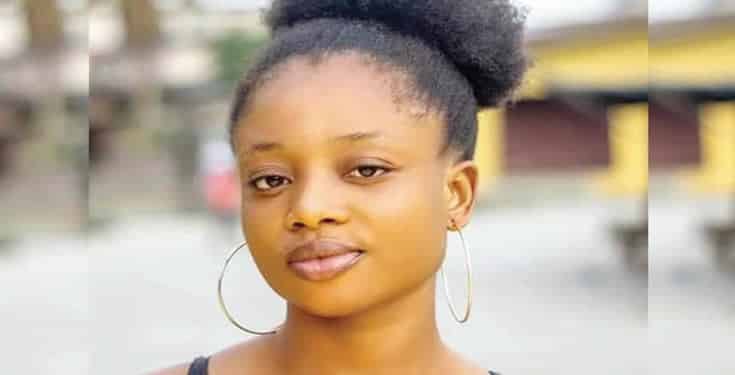 26-year-old hairdresser identified as Kenile Nwabuzor has reportedly committed suicide after her boyfriend identified as David, called off their two-year relationship on April 11th.

Naija News understands that Kenile who said she started dating David shortly after her mother’s death, said they had a rocky relationship as she felt inferior to him because she was a secondary school leaver.

On April 11th after they called off their relationship, Kenile reportedly sent him a text lamenting he had made life miserable for her and that she would soon kill herself.

David said she later sent a text message to him, saying “You want to kill me; I will help you kill myself. Thank you for making my life a hell.”

He said immediately after he read the message, he took a motorcycle and headed to her house.

“On getting there, I peeped from her window and saw her body dangling on a rope tied to the ceiling. I shouted and barged into her room. Her neighbours helped me loose the rope while I brought her down. She was already heavy, but I was not feeling the weight. I was not in my right senses again. I took her on a motorcycle to a nearby hospital. She was referred to Randle General Hospital. A doctor confirmed her dead on arrival. I called her brother and relations. The police arrested me and detained me for two days. They said I should not have brought her down,” he said.

Kenile was buried on Saturday, April 13 which was David’s 26th birthday.

Confirming the incident, the Lagos State Police Public Relations Officer, DSP Bala Elkana, said the police had received a distress call from the general hospital that one Kenile Nwabuzor was brought in dead by her boyfriend.

“Preliminary investigation revealed that the lady had earlier sent a text message to her boyfriend that she would kill herself. Her corpse was removed and deposited in the Lagos Mainland Hospital morgue.” Bala said.