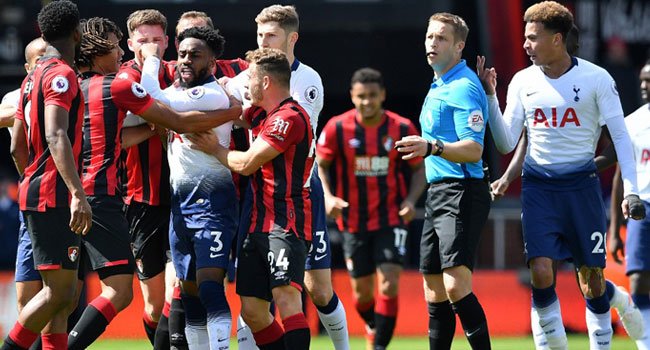 Mauricio Pochettino’s Tottenham were handed a 1-0 defeat at Bournemouth on Saturday which further derailed their Premier League’s top four ambition.

The game looked set to finish in a 0-0 draw but Bournemouth defender Nathan Ake had other plans, as he netted in the stoppage time of the game to give all three points to Bournemouth.

He headed home from Fraser’s corner in the 91st minute.

The result means fourth-placed Chelsea will now go above Spurs if they defeat Watford and Arsenal, currently fifth, will move to within one point of their north London rivals if they beat Brighton.

“Of course it is difficult to get something positive. We made a massive effort,” said Pochettino after the game.

“We need to move on. We have ahead two finals. It is in our hands. If it does not happen we will be proud because nobody expected Tottenham to be in the position they are today.”

“We are fighting six teams. It’s impossible for all six to get the top four, whatever happens, I will feel proud and whatever happens in the semi-final I will be proud,” added the Argentine.

Channels TV, quoting Nigeria News reports, disclosed Tottenham also ended the game with nine men as both Son Heung-min and defender Juan Foyth got red cards in the course of the game.