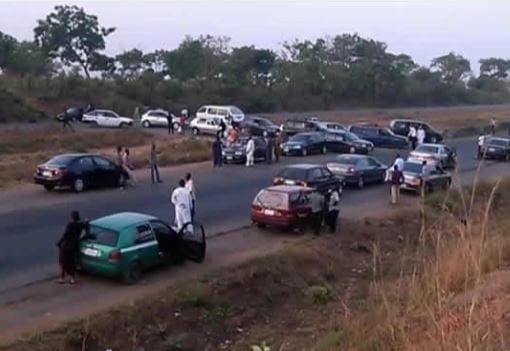 Bandits on Monday, blocked the Kaduna-Abuja expressway, forcing several motorists to abandon their vehicles and head for nearby bushes to avoid being abducted.

The development, Naija News learned also led to the abduction of many travellers, including Chairman of Universal Basic Education (UBEC), Dr Muhammad Abubakar, and his daughter.

It was gathered that the driver of the UBEC chairman was said to have been shot dead when the bandits opened fire on their vehicle.

The development which has left many motorists and passengers unaccounted for just as their belongings were carted away by the kidnappers, is coming after the acting Inspector General of Police (IG), Mohammed Adamu, assured travellers on Kaduna-Abuja expressway of their safety.

Naija News learned that the incident happened a few kilometres to Katari village in Kagarko Local Government Area of Kaduna State at about 3.30 p.m.

Hundreds of motorists travelling from Kaduna to Abuja as well as those going the other way found themselves stranded for more than 40 minutes as both lanes of the expressway were blocked by cars hastily abandoned by their owners, a report by NAN said.

The report said the bandits left the scene of the incident and moved into the bush with some of their victims before the arrival of some security men, who later cleared the road for the motorists to continue on their journeys.

Commenting on the incident, Umar Shagalinku, the owner of the popular Shagalinku Restaurant in Abuja, lauded the prompt intervention of the security personnel.

Shagalinku, however, called on relevant security authorities to use modern technology including helicopters to track kidnappers.

“I have been hearing about this robbery and kidnapping along Kaduna – Abuja road but today I witnessed – this is terrible and ungodly.

“I sincerely pray that authorities concerned will do something about these criminals so that motorists will feel safe while plying this important road,” he said.

Meanwhile, the spokesman of the Kaduna State Police Command, Yakubu Sabo, confirmed the incident in a statement in Kaduna.

“We received information through DPO (Divisional Police Officer) of Katari that armed men in military uniform intercepted a Land Cruiser Jeep with Reg. No. 07E 04 FG, and Toyota Sienna with Reg. No. SLJ 465 TN at Kurmin Kare Village along Kaduna – Abuja Express Way, opened fire on the vehicles and in the process, the driver of the jeep was shot dead, while the occupants, Dr Muhammad Abubakar who is the chairman of Universal Basic Education Commission (UBEC) and his daughter were kidnapped,” he said.

“The occupants of the Sienna – one Alowonle Olalere, and Onuka Victor, both of Ibadan, Oyo State, were injured and rescued to Katari Police Station.
“They were said to be returning from Kano where they went to shoot a film titled ‘the last step’.

” IG’s IRT was also contacted for technical support in tracking the hoodlums. At the moment, the two vehicles were recovered to police station.

“The Commissioner of Police, Ahmad Abdur-Rahman appeals to members of the public to support the Police with relevant information that could assist in apprehending the perpetrators of this heinous act. He said the command will not be deterred in its efforts to bring crime to the barest minimum in the state. CP Ahmad said the hoodlums are only testing our collective will and we cannot relent. Update follows in due course, please,” the statement added.