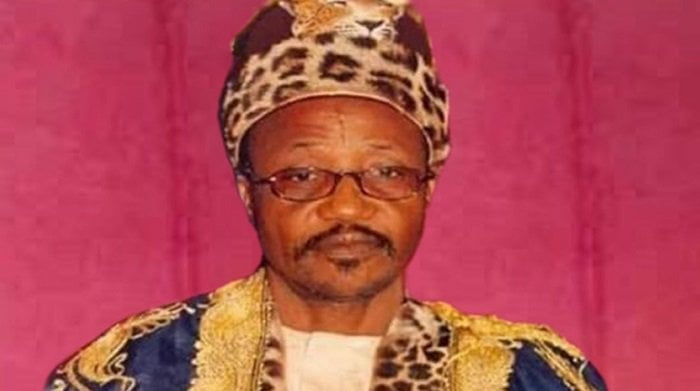 The Police in Kaduna state have arrested the suspected kidnapper and killer of the traditional ruler of Adara chiefdom in the state, Maiwada Galadima.

The monarch was killed in October 2018 on his way to his palace after accompanying Governor Nasir el-Rufai to Kasuwan Maga to commiserate with the community over violence that claimed many lives.

Naija News recalls that the Kaduna State government during the weekend had to impose 24-hour curfew on Kajuru local government as rumour spread over an imminent crisis in Kasuwan Magani community.

The police said the suspect, Abubakar Ibrahim alias Dan Habu, 37, and a native of Kabam in Igabi Local Government Area of Kaduna state confessed to kidnapping and killing the traditional ruler.

A statement in Abuja by the Force Spokesman, DCP Frank Mba as stated by The Nation, said the operatives arrested 17 other suspected notorious kidnappers belonging to various gangs.

Items recovered from them include 22 AK 47 riffles, five locally fabricated pistols and a cache of live ammunition, among others.

Mba attributed the success made to the arrest of the “Spiritual Father” of kidnappers and armed bandits operating in the northern part of the country, Mallam Salisu Abubakar.

He added that the Police detectives attached to Operation Puff Adder, through a series of detailed, intensive and sustained investigative operations successfully arrested 18 more notorious kidnappers and armed robbers at different times and places across the country.

On how the arrest was made, he said: “The combined team of crack detectives from IRT, TIU and other Operatives, using actionable intelligence obtained from the spiritual god father of the kidnappers and other multiple sources, tactically “smoked out” the kidnappers and armed bandits from their hide-outs in Birnin Gwari, Rijana, Katari, Mai Daro and Buruku forests in Kaduna State before they were eventually arrested at different locations and times in Kaduna, Katsina, Niger and Kogi states respectively.”

According to him, investigations carried out have positively linked the arrested suspects to some of the most heinous crimes committed in kaduna States and its environs in recent times.

“Similarly, the arrested gang members were also indicted by investigations for the kidnap and murder of Mallam Yakubu Usman, 40 years old male of Jere LGA, Kaduna State and many other crimes.”

Mba said the 18 male suspects are currently in Police custody and assisting in the on-going investigations.

He noted that the suspects who belong to different gangs are fairly independent but vicious criminal gangs, adding that their operations are centrally coordinated by their spiritual godfather Mallam Salisu Abubakar.

The police noted that efforts are currently being intensified to arrest other gang members still at large and recover all weapons in the gangs’ armory.