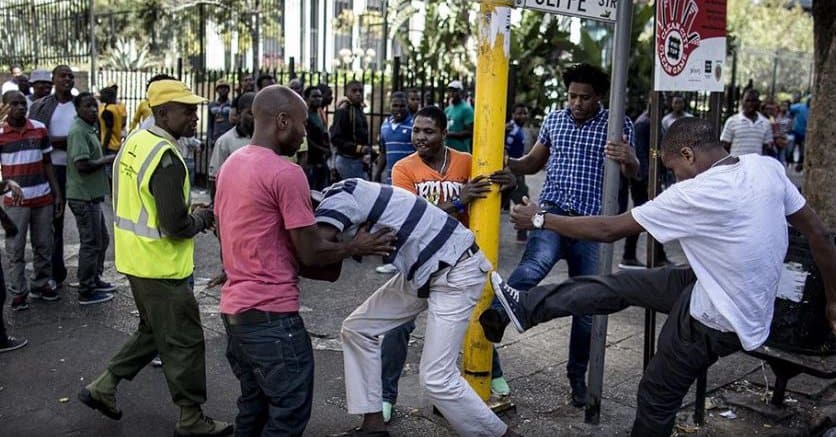 The Nigerian Victim identified as  Tony Elochukwu from Nnobi Anambra State was said to have been killed by an unidentified gunman in South Africa.

The President of NICASA, Prince Ben Okoli, said this in a letter sent to the Consular General, Nigerian Consulate in Johannesburg.

In the letter, obtained by News Agency of Nigeria (NAN) in Abuja on Saturday, Okoli decried the death and continued killings of Nigerians in South Africa.

“We received yet again the sad news of the death of another Nigerian in Witbank Mpumalanga province.

“Mr Tony Elochukwu from Nnobi Anambra State was shot twice in the head by an unidentified Nigerian gunman on April 24 at around 2:45pm,” he said.`

He said those standing, however, told him that they did not know where since they do not smoke.

Okoli said the man then pulled out his gun and shot Elochukwu on the head and sped off in a car parked down the street.

He added that a case of murder had been opened at the police station by NICASA Chairman in Mpumalanga, Mr Obeji Chukwuma.

“This look like another case of Nigeria killing themselves. This ugly trend of Nigerians killed by fellow Nigerians is on the increase and is disturbing to our community.

“NICASA is deeply worried over the death and continued killings of our citizens in South Africa.

“People are worried and scared, since none of the perpetrators had been arrested or charged over it,” he said.

He appealed to the consulate to pressure the South African police to pursue the case of death of any Nigerian with seriousness.

“The South African police must stop attempting to encourage this killings by lack of investigation and prosecution with aim of bringing to justice every criminal involved in these heinous crimes,” he said.

The Consul General, Nigerian Consulate Johannesburg, Mr Godwin Adama, had condemned the killing of Nigerians at different locations in the country.

“The cases are the stabbing of a Nigerian, Mr Bonny Iwuola, in Turfontain in Johanesburg on April 6 at about 23:30 hours in front of his house, by unknown assailants, and more of crime related murder.

“Another Nigerian, Gozien Christian, from Agbor in Delta State, was stabbed to death by three unknown assailants. No arrest has been made but cases were opened and police are investigating the murders,” he said.

The third case of murder which happened on the night of April 8 at Sunnyside in Pretoria happened at the usual place of cult-related murders by Nigerian cult groups.

“This particular case had more connection with business-related disagreement that turned sour.

“Investigations are on but eye witness accounts indicated that he was killed and his new Mercedes car-2019 model was snatched and driven away. All these cases do not appear to be xenophobic.