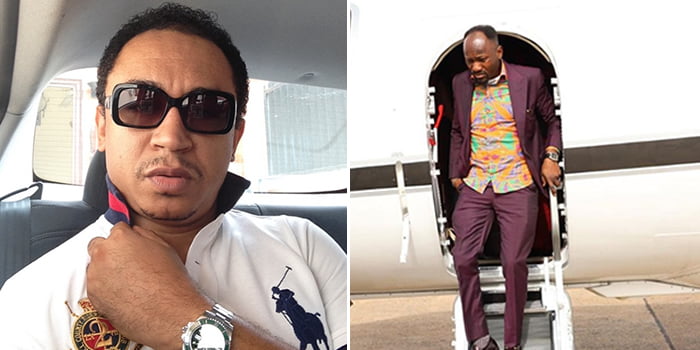 The General Overseer of Omega Fire Ministries, Apostle Johnson Suleman, says he has his “reservations in Daddy Freeze‘s presentations”.

Naija News reports that the Edo-based preacher made this statement in reaction to the comments made by Daddy Freeze about the private jet he recently acquired.

This online news platform recalls that the controversial On Air Personality (OAP) and founder of the Free Nation movement had challenged the preacher to name the number of poor people in his ministry that he has helped in time past before purchasing his private jet.

“Please, how many poor people in your church are you helping? I need a response, thank you,” Daddy Freeze had said.

Reacting, the Apostle in a video sighted by Naija News, said he does not agree on many things Daddy Freeze says but that does not mean he is against the OAP.

Apostle Suleman noted that he can “stand in front of the camera and speak against some things” Daddy Freeze “stands for and yet we are still talking.”

“It only takes a scriptural person to love, yes he said a lot of things against me, so I heard, so we see such as uprising but I see a person who discusses scriptures with me.

“There has never been anything than scriptures. I have never seen him, I don’t have his account details so this talk of maybe money was given, nothing of such happened. So why will I be accused?

“I have heard a lot since yesterday, some are saying oh Apostle you discussing with an anti-Christ, Apostle you have deviated, you are talking with someone who is against the body of Christ.

“I have my reservations in his presentations. We don’t agree on many things, tomorrow I can stand in front of the camera and speak against some things he stands for and yet we are still talking,” he added.

Watch the full statement below…