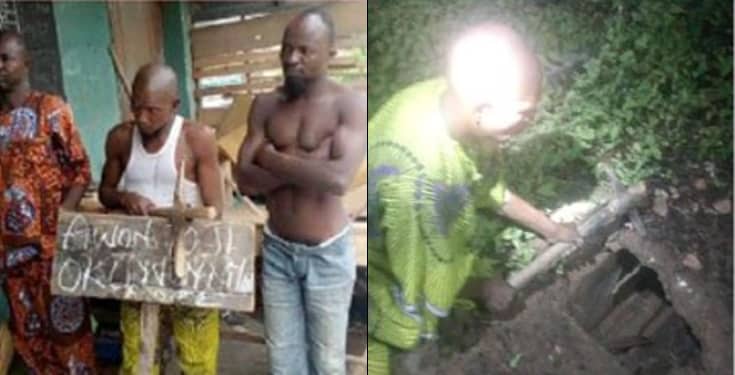 Operatives of the Ogun state police command have arrested a bricklayer who also doubles as a herbalist, Kunle Adewunmi, and his two accomplices.

Naija News understands that Adewunmi was apprehended alongside his accomplices for attempting to steal human parts from the graves inside the Methodist Church grave in Ogbe community in Abeokuta, the state capital.

The suspects were arrested on Saturday shortly after a female member of the Odua People’s Congress (OPC) raised alarm after she caught them.

The member of the OPC was said to have caught Adewunmi and his accomplices digging a grave in the church’s cemetery.

Naija News understands that Adewunmi is the official bricklayer of the Methodist church usually hired by the church to plaster graves after burial of bodies at the graveyard.

‘’The bricklayer is very known to the church members. He is the one usually contracted to plaster tombs inside the cemetery and took advantage of that to carry out his nefarious act at the cemetery.’’ a member f the church revealed.

The arrested suspect confessed to supplying the human part exhumed to traders at the Itoku market in the state.