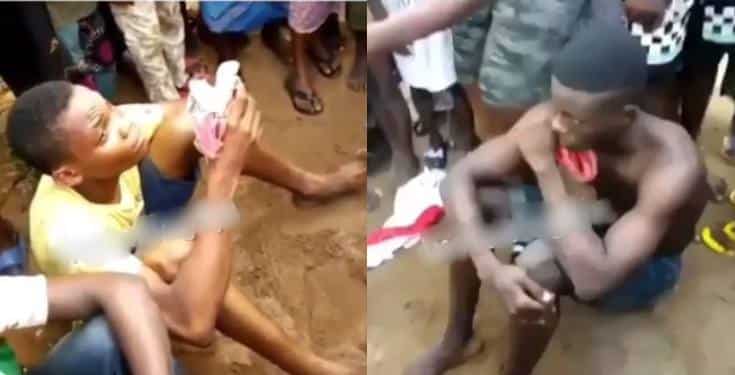 A video has emerged and had since been making the round on the internet, showing how the moment some Nigerian undergraduates were busted after stealing panties in a community in Oyo state.

Naija New understands that the suspects are all students of the  Emmanuel Alayande College Of Education in Oyo.

The students who are in their teens were apprehended after a resident in the area raised an alarm. They were said to have stolen the panties for the purpose of rituals.

The suspects who were caught with a certain number of panties were made to sit on the floor while the Police in the state was contacted.

Boys of the younger generation seem to be in a haste for greener pastures irrespective of their means.

Naija News had earlier reported that some operatives of the Economic and Financial Crimes Commission (EFCC) have apprehended about 32 suspected internet fraudsters, popularly known as Yahoo boys.

The suspects were apprehended at several strategic points in their home in Abeokuta, Ogun state.

Watch the video showing the boys below: