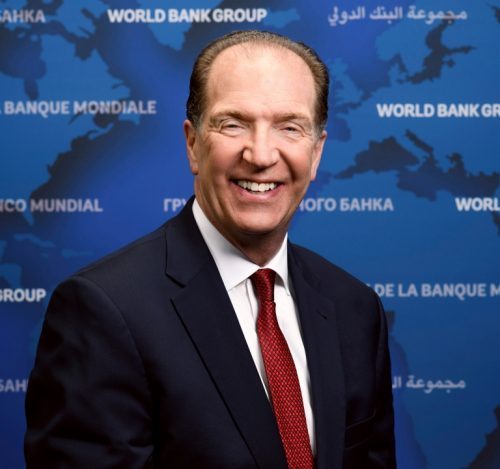 World Bank’s new President David Malpass will be making his first foreign trip to sub-Saharan Africa to highlight his vision for the bank’s poverty reduction and development agenda, the bank said on Friday.

David Malpass, fresh from a senior Trump administration post at the U.S. Treasury Department, is instead making his first foreign trip as the World Bank’s leader to sub-Saharan Africa to highlight his vision for the bank’s poverty reduction and development agenda.

A World Bank spokesman said Malpass will be travelling this weekend to Madagascar, Ethiopia and Mozambique before flying to Egypt and a debt conference in Paris.

Malpass has said that Africa is a key priority for the bank due to its high concentration of the world’s poorest people.

World Bank Chief Executive Officer Kristalina Georgieva, who had been acting president during the leadership selection process, is representing the institution at the summit and had accepted China’s invitation before Malpass started at the bank on April 9, the bank spokesman said.

david malpass is another trump shoo in .he worked for u.s treasury dept.under mnuchin.
he didn't attend b.r.i but went Ethiopia .probably to see what a marvellous job CHINA done in building their high speed RAIL. while there he could also see Kenya ,sudan .soon to link to ethiopi

Malpass, who was the Treasury’s undersecretary for international affairs, is a longtime critic of China’s Belt and Road lending practices and had worked to raise alarms about them with G7 and G20 countries in that role. Malpass said at the IMF and World Bank spring meetings this month that meeting the development lender’s goals of ending extreme poverty by 2030 called for a focus on Africa.

“By 2030, nearly 9 in 10 extremely poor people will be Africans, and half of the worlds poor will be living in fragile and conflict-affected settings,” he told a news conference at the meetings. “This calls for urgent action by countries themselves and by the global community.”

He told reporters on his first day on the job that he wanted to “evolve” the bank’s relationship with China to one where Beijing is a bigger contributor of capital and cooperates more closely with the bank on development issues and poverty reduction.