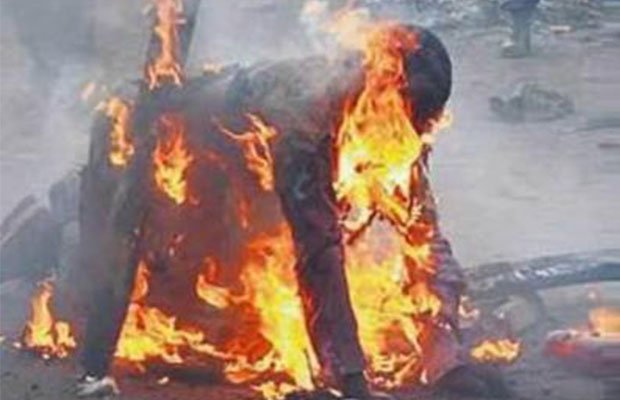 A middle-aged man identified as King has set himself ablaze in Rivers State, south-south Nigeria, in what many believe was as a result of frustration.

Naija News learned that the ugly incident took place inside the victim’s room in Odaga community, Abua/Odual Local Government Area of the state.

Reports say the victim was said to have locked himself inside his room before setting himself ablaze at dawn, a development that made it difficult for the victim to be rescued.

It was gathered that by the time neighbours noticed the smoke oozing from King’s room, the fire incident had intensified which made it impossible for anybody to go in.

Reports say King’s neighbours had to break down the window to rescue the victim who was already unconscious.

Efforts to save the life of the deceased proved abortive as he died while being rushed to a nearby clinic for medical attention.

A relative of the victim, who simply identified himself as Pastor Duke, told journalists that King could have possibly taken his life out of frustration as he had lost his male siblings and recently his mother, whose remains were still in the mortuary.

Duke noted that the incident aggravated his smoking and drinking habit, adding that Duke explained that the deceased who returned home on Sunday morning was drunk while holding a lit cigarette.

The pastor added that the fire could have started from the cigarette King was smoking before he slept off.

His words: “King was a father of three and his wife is eight months pregnant; he was the only surviving male of his house and to make matters worse, he just lost his mother, who is still in the mortuary as we speak.

“It is possible that he was frustrated because lately he has increased his smoking and drinking habits and is mostly drunk.

“That night, King came home drunk and was smoking a cigarette, and I think the fire from the cigarette must have caught his mattress, which eventually caused the fire,” he added.