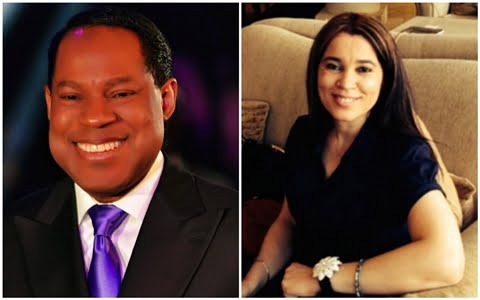 The ex-wife of Pastor Chris Oyakhilome, Anita has finally broken out of her silence to speak on her marriage with the Pastor.

Naija News understands that the ex-wife of the pastor took to her social media platform to voice out. In her post, while wishing herself and former husband a happy wedding anniversary, Anita poured out her mind on how she feels about her marriage.

One of the reasons cited then from sources as reasons for their separation was the issue that is not unconnected to the distance and communication between the couple.

It was reported that none was ready to leave his/her resident country to live with the other. Anita was based in the UK while Chris in Africa.

In her post, Anita said; “reality of a dead marriage in which the wife spends many years of endless hope in anticipation for a change and enduring a relationship that is bereft of life.”

Happy Anniversary to the best couple in the world

Husband: How are you?

Wife: I amgood. How is your day?
Husband : Good
Wife : Today is our anniversary. Happy Anniversary.
Husband : Happy anniversary.
Wife : I noticed many greetings on social media wishing us a happy anniversary. I find it confusing to read comments from your close friends saying “ best couple in the world”; it sounds like a complete joke, when they know we rarely see each other. We see each other at most ten days in a year; I can’t understand their reason for making this comment, such flattery. It is confusing to me.

Husband : Well, at least they sent their greetings.
Wife : Their greetings are on social media, no contact by text or by email.
Husband : Silence
Wife : Hello
Husband : Yes

Wife : I sometimes wonder if we are married. There is nothing more to this relationship to indicate we are married apart from a ring on my finger; the ring is another story and our pictures are interjected because we are rarely together to take a proper picture. I feel sad that we are not together.

Husband : Yes and you keep coming back to ask the same question.
Wife : Okay. Since you don’t often call either, please call the children, at least once a month. They go on for months without speaking with you. I noticed they don’t seem to care anymore.

Facing the reality of a dead marriage, where a spouse spends many years of endless hope in anticipation for a change, enduring a relationship that is bereft of life. Believe it or not, this was somebody’s experience and is another person’s state of affair.
There is so much in life to be enjoyed.