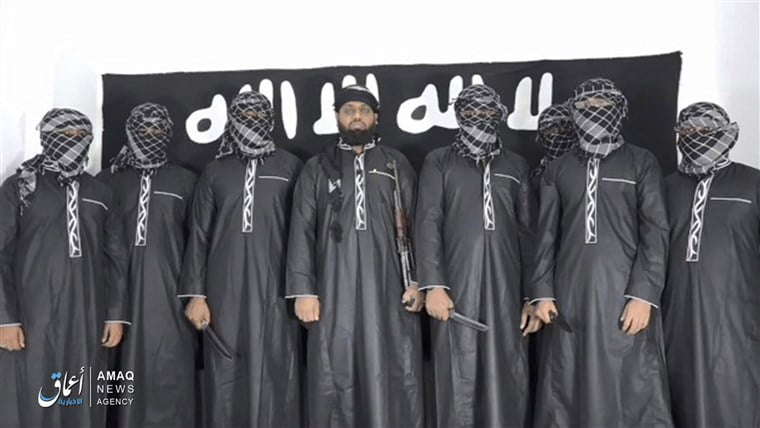 A picture of the “suicide bombers responsible for the Easter Sunday attacks in Sri Lanka” has been released by the Islamic State (ISIS).

Amaq news agency, the official mouthpiece for the group, released the picture after they had earlier claimed responsibility for the suicide bombings which led to the deaths of over 300 persons, saying it targeted Christians and Sri Lanka, citizens.

“Those, who carried out the attack that targeted the citizens of the coalition and Christians in Sri Lanka the day before yesterday were Islamic State fighters,” Amaq reported yesterday.
Although all the suspected bombers covered their faces, Zahran Hashim, an extremist cleric, left his open.

The picture was taken in front of an ISIS flag and Hashim Is also believed to be the mastermind of the attacks.

The death toll from the multiple suicide attacks at churches and hotels in Sri Lanka over the Easter weekend rose to 321 on Tuesday, the national day of mourning for the victims.

There are reports that the bombings were intended as retaliation for last month’s attack against Muslims in Christchurch, New Zealand.

#BREAKING: ISIS release a portrait photo of the seven terrorists responsible for the #SriLankaBombings standing in a row. Also, notice the 8th terrorist standing behind the second one from the right. pic.twitter.com/mFMlHoYzdt