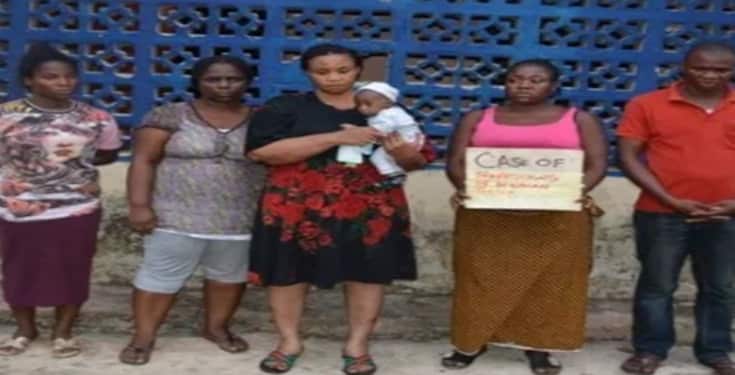 A 23-year-old lady identified as Chinonye Oparaocha has been arrested for allegedly selling off her baby for N850,000.

Naija News understands that the baby boy was allegedly sold out in about six hours after he was delivered.

He was said to have been delivered in a hospital along Nekede road in Owerri West Local Government Area of Imo state.

Some operatives of the Imo state Police command arrested Oparaocha along-side other suspects who allegedly have connections with the sale of the baby boy.

A statement from the state police command spokesperson, Orlando Ikeokwu, says that the baby was sold by a nurse, Confidence Anyanwu, who facilitated the shady deal.

The statement from the Police command read;

“On 8/02/2019, at an undisclosed clinic along Nekede Road in Owerri West L.G.A, one Chinonye Oparaocha ‘f’ was delivered of a baby boy. The said Chinonye Oparaocha later conspired with one Confidence Anyanwu, a nurse and native of Umuhu Okwuato in Aboh Mbaise Local Government Area but resident at No. 41 Mbaise Road Owerri in company of her husband Amaeze Anyanwu now at large who carried the six (6) hours born baby to Port – Harcourt in Rivers State where one Duru Christian was waiting for them.

On arrival at Port – Harcourt, Duru Christian in the company of one Mrs George Iyowuna met them at the hideout, took over the baby boy and handed over to a prospective buyer one Mrs William Cynthia and her husband who eventually paid the sum of N850, 000.00 (eight hundred and fifty thousand naira).on 13/04/2019.

Operatives of the Scorpion Squad arrested the above-named suspects and recovered the newly born baby boy Abiya William while efforts are on-going to arrest the fleeing members of the syndicate. “Suspects have made useful statements to the police concerning the crime and are helping the police in the investigation.”