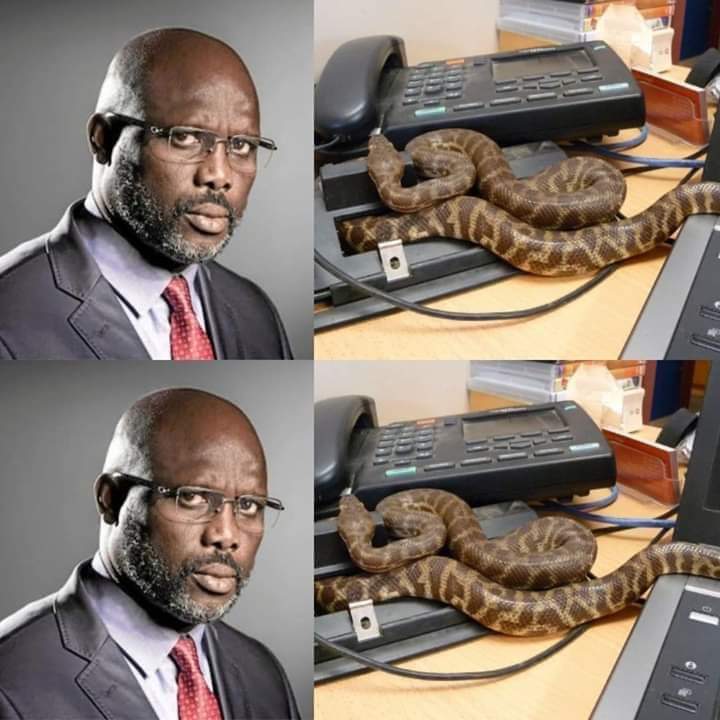 A storm of reactions by Twitter users has greeted the news that two snakes were found in the office of Liberian President, George Weah, which forced him to work from his private residence.

Naija News had reported earlier that the President’s Press Secretary, Smith Toby told the BBC that on Wednesday two black snakes were found in the foreign affairs ministry building, site of the official office.

the President’s Press Secretary said all staff have been told to stay away until 22 April.

It was learned that Police and presidential security were seen guarding Weah’s residence in the capital, Monrovia. A fleet of vehicles including escorts jeeps were parked outside.

Toby said the Ministry of Foreign Affairs started to fumigate on Friday.

Moments after the news broke, Twitter users took to the micro-blogging site to air their opinions on the matter.

In 2017 Nigeria President Buhari had to abandon his office for sometime after a rat infestation. Now snakes have chased Liberia President George Weah out of his office. Do you smell a fish? #SnakesAndLaddershttps://t.co/fEDO0I6iFs

George Weah has a very good excuse for working from home this week https://t.co/wSt2D20TOi

Africa is a country. Rats for one, snakes for the other. What will it be next? Hamsters? Pigeons?

@Ibr925fm. When I saw the George Weah story, I shook My Head for Mother Africa. No wonder we are far behind.. When Snakes and rats now becomes Overlords in our highest seats, we common masses should kuku expect our houses to turn to Zoo on day #riseandshine

I'm sorry for laughing at Buhari when rats chased him out.

President George Weah of Liberia has been deposed from his office by snakes ? ?. Witchcraft is real!!!!! pic.twitter.com/TdFra1PepP

Breaking : just like rats chased president buhari out of his office, Liberian president, george weah has been chased out of office by snakes…oh africa………. pic.twitter.com/j2cdMN9qUb