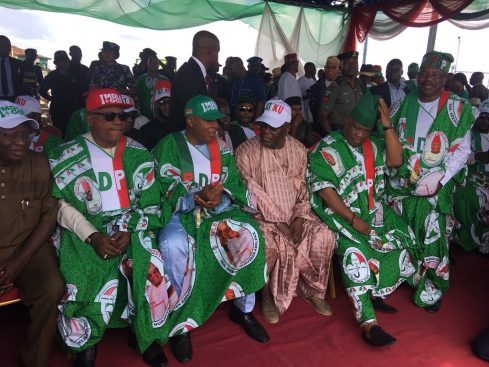 The National Working Committee (NWC) of the Peoples Democratic Party (PDP) on Wednesday met with serving and newly-elected lawmakers ahead of the inauguration of members of the 9th National Assembly.

The meeting came barely 24 hours after the ruling All Progressives Congress (APC) adopted Senator Ahmed Lawan and Hon. Femi Gbajabiamila as the next Senate President, and Speaker of the House of Representatives, respectively.

The meeting, which was held behind closed doors at the Lagos/Osun Hall, Transcorp Hilton, Abuja, had in attendance all the serving and newly-elected lawmakers that are members of the PDP.

Speaking before the meeting went into a closed-door session, the PDP Board of Trustees (BoT) Chairman, Senator Walid Jibrin, urged members of the 9th senate to ensure that the party retains the leadership.

“We have come to share ideas on how to keep the party alive. We are very proud of the members of the National Assembly; you are the hope of our party. I hope you will keep hope alive. We have no doubt that what is before us, we are going to surmount it. PDP should lead the Senate,” he said.

It is believed that the meeting would afford the main opposition party an opportunity to strategise in order for the party to retain important leadership positions in the National Assembly.