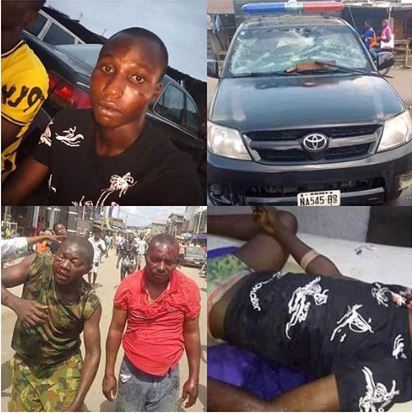 A soldier was beaten to a pulp when he tried preventing an angry mob from lynching to death a truck driver who mistakenly killed a man in the Ajegunle axis of Lagos state.

Naija News reports that the deceased identified as Kola Mutiu, fondly called Black Jesus was trying to collect money from the driver when he was knocked down in Lagos.

He was immediately rushed to the hospital but gave up the ghost a few minutes after he arrived at the hospital.

The Death of Black #Jesus angered his colleagues who went after the truck driver and unleashed their anger on him.

While melting jungle justice on the driver, a Soldier stepped in with the aim of rescuing the driver from the hands of the angry mob but unfortunately, he became the victim of the jungle justice.

The mob dealt with the Soldier to a pulp and destroyed the military van he drove in.