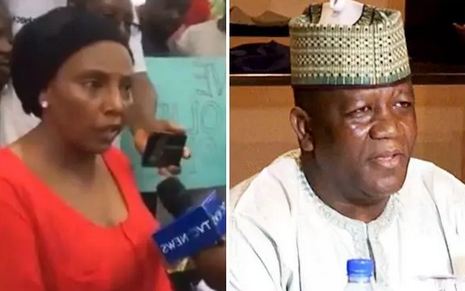 Nigerian media personality, Kadaria Ahmed has promised to go to the streets in protest once again if the killings in Zamfara State continues.

Speaking on Arise Television on Wednesday, Kadaria said it is her job as a citizen to hold the government accountable.

On April 6, the journalist and a group of protesters caused a stir when they marched to the presidential villa in Abuja over the persistent killings by suspected bandits in the state.

Naija News understands that Kadaria maintained that the problem in the state cannot be solved through security alone, challenging the government to address issues such as poverty and education.

“I’m very happy with the response we got. The instant decision by the federal government to take some key actions has started getting us real results,” she said.

“People on the ground are talking about the fact that a few people who have been kidnapped have been rescued. Armed bandits have been killed. Some have been arrested.“There is a serious security operation taking place there and we are grateful for that. But beyond the security, we do not feel that the problem of Zamfara can be solved through security alone. First of all, it’s a very murky conflict. It’s been going on for so long that it’s very difficult to unravel the causes.

“It’s important that in the immediate term you provide security. People are able to go about their businesses but long term, there are really some serious issues that need to be tackled and this is why we are very angry with the people who have been in power successively in Zamfara state.

Naija News also learnt Kadaria promises to reorganise a fresh street protest if the  killings continue in the state.

“Absolutely. If the insecurity is about to kickstart again, we will take to the street and that is my job as a citizen and I think that should be the job of every citizen to hold people in authority to account by reminding them that this is what we elected you to do and security is your primary responsibility as government. We can’t take arms and defend ourselves. If we did, there will be chaos.”

Twitter is indeed a great leveller. Watched you today on @ARISEtv, your responses and deep insight on critical issues are so so refreshing. I may have disagreed with you on several other issues, but I agree on the points you raised, especially as it pertains to unity.