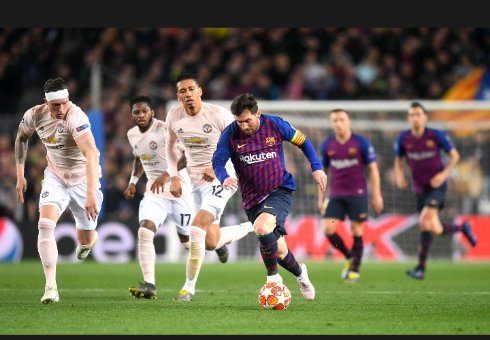 Spanish giants Barcelona have dumped English Premier League club side Manchester United out of the UEFA Champions League with a 4-0 aggregate win to advance to the semi-final stage.

Naija News reports that Lionel Messi pounced on two Manchester United mistakes to score twice on the 16th and 20th minutes in the presence of 96,708 spectators at the Camp Nou on Tuesday night.

The Argentine International first nicked the ball off the careless Ashley Young and then watched as a weak shot from distance squirmed underneath David de Gea.

Former English Premier League and Liverpool star, Philippe Coutinho, who had what could be tagged as his best performance of the season, added a third with a curling effort into the top corner to end the game 3-0 and 4-0 on aggregate.

Meanwhile, Liverpool, who take a 2-0 lead to Porto on Wednesday, are the most likely obstacle between Barca and their first Champions League final since they last won the tournament in 2015.