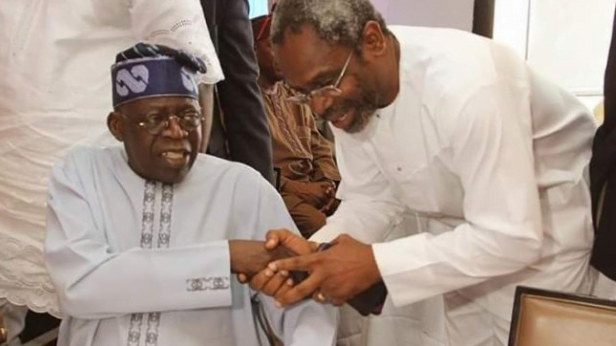 In spite that the Southwest geopolitical zone already secured the Vice President’s position, the “zone” that came forth by the number of votes from geopolitical for the APC is also being pushed for “speakership” as against the North Central geopolitical zone that came third and has never produced leadership of the House of Representatives in 20years.

According to 247ureports, Tinubu wants, Femi Gbajabiamila as Speaker of the House of Representatives and the APC National Chairman, Adams Oshiomhole, who is an ally of Tinubu is at the forefront of the plot.

A plot to secure what was described as “Baba’s endorsement” so as to shut out the North Central zone that is agitating for the Speakership position was hatched in a meeting held in Tinubu’s residence last week.

Already, Oshiomhole has been able to secure an appointment for the APC returning and elected members of the House of Representatives to have a “dinner” with President Buhari on Tuesday.

Invitation to the dinner termed “joint NWC/members of the House of Representative’s dinner with Mr President” was sent out last night.

It reads “The National Chairman, Comrade Adams A. Oshiomole has the Honour and pleasure to cordially invite Members of the National Working Committee and APC Returning and Elected Members of the House of Representatives to dinner with Mr President.”

According to the invitation issued on behalf of Oshiomhole by his Director of Admin, Abdullahi Yusuf Gashua, the dinner will hold at Banquet Hall, Presidential Villa, Abuja.

“As it was done in the case of Senator Ahmed Lawan, Oshiomhole will just announce at the dinner that the Speakership position has been zone to the Southwest and Gbajabiamila has been chosen.

“Thereafter, some selected returning members of the House of Representatives will be made to speak in support of the arranged endorsement.

“Even though Tinubu and Oshiomhole are not unmindful of this plot being against the words and letters of our party’s constitution, especially regarding fair and even distribution of positions, they are hellbent in pushing it through because of his (Tinubu) 2023 Presidential ambition.

“This same desperate ambition of Tinubu to be President cost us States like Imo, Oyo, Rivers and may cost us Zamfara State. It almost cost us Ogun State when Governor Ibikunle Amosun’s candidate was denied ticket and we must tread carefully so that the ambition of one man does not cost us the National Assembly leadership,” a member of the party’s NWC, who preferred anonymity said.