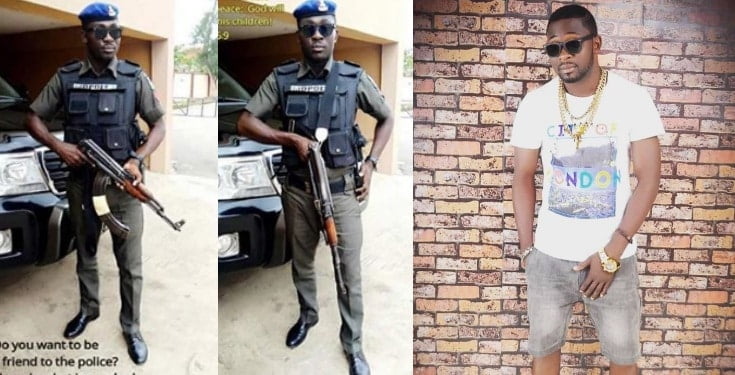 An officer of the federal republic of Nigeria has on Monday reacted to the clamour of the #EndSARS campaign by Nigerians to end the brutal killings of some trigger-happy officers of the Special Anti-Robbery Squad (SARS).

The Police officer identified as King C Clear Odiase has registered his reactions to the campaign in his statement where he mentioned that the role of the SARS operatives in curtailing criminalities in the country cannot be underestimated.

“To protect my wife and family is not an issue, I am just having sympathy on others. Those who clamour to the authority to end SARS are criminals or criminally sponsored check them very well,” the officer wrote on one of his social media handles.

The officer’s reaction comes after Naija News had reported on the recent attacks by some SARS officers who attacked their victims, a couple at the Ajegunle axis of Lagos state, while the couple and a friend were returning from a Club in Lagos, a development that has attracted many reactions.

Top Nigerians including celebrities have continued to express their displeasures towards the Saturday’s killing.

Actress Omotola Jolade-Ekehinde, aka Omosexy has taken to her Twitter handle to lambaste President Muhammadu Buhari for the recent killings in some parts of the country including Zamfara and Kaduna state.

In a similar vein, Nigerian Singer and Songwriter, Daddy Showkey also took out time to pour curses on the SARS operatives for their recent killings, particularly that of the Ajegunle axis in Lagos.

In a step to curtail the activities by the SARS operatives, the Lagos state Police command has apprehended five officers in connection with the Saturday’s killings.