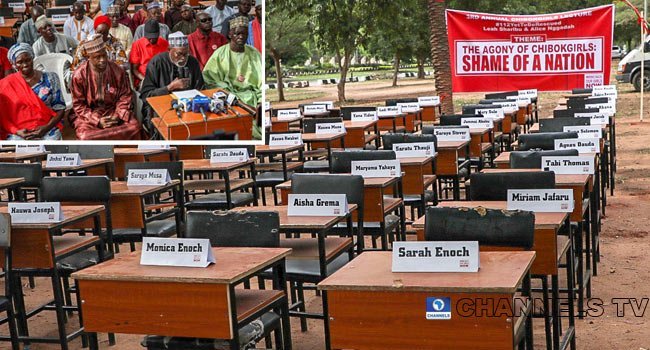 Rachael Daniel, one of the parents of the abducted students of Government Secondary School, Chibok, Borno state, has pleaded with Abubakar Shekau, the factional leader of Boko Haram, to release Rose Daniel, her daughter, who has been in captivity since 2014.

Naija news Understands that She made the appeal when parents of the abducted schoolgirls converged on Maiduguri, Borno state capital, in the company of other parents, whose children were abducted by Boko Haram.

“The abduction of my daughter has left so much pain in my heart. I lost my husband and I am left to carter for six other children,” Racheal said.

Hamsatu Allamin, executive director of Allamin foundation for peace and development, an NGO, said the campaign was to raise awareness on cases of abduction by Boko Haram. She said insurgents were targeting women and girls and destroying the society in the process.

Today @ the Unity Fountain we arranged 112 empty seats & desks of of our remaining 112 #ChibokGirls and Leah Sharibu our #DapchiGirl with their names.

No serious country and government can simply move on without closure on a tragedy of this scale.

Just look at the emptiness. pic.twitter.com/NCPDPgWZGY

Allamin said abduction of girls in the north-east began years back after the arrest of the wives of the insurgents by the military.She narrated how the women were detained in Giwa barrack in Maiduguri.

Allamin added that Shekau issued a number of statements where he threatened revenge on government officials.

“Since you are now holding our women, just wait and see what will happen to your own women. to your own wives according to Sharia law,” she quoted Shekau to have said.

“On December 12, 2012, large number of women (in hundreds) converged on front of the Zenith Bank near the Government House and Diamond Bank along Baga road (they were said to collect their share of N10,000 economic empowerment grant.

“On their way back, one vehicle conveying such women was reported to have been taken away long Damboa – Biu road, till date nobody accounted for them.

“Four days after, a small community behind Dalori quarters, Wadiya was attacked at night, women and youths were taken away. IDPs from the irrigation farming and fishing communities around Lake Alau, particularly those from kayamla and environs narrated how several girls were taken, telling them that since “your parents do not want to marry you out, we are taking you as wives.

Mr president we're tired of this long theory. We need action not promises!!

“On 17th September 2013, when gunmen in military uniforms blocked the highway leading to Damaturu (at Benishek), women and some young men were sorted out and taken away. A number of Fulani women and girls were taken away from their nomadic settlements around Buni Yadi in Yobe.

“The 276 schoolgirls abducted from the Government Secondary School, Chibok on April 14 was the first to be ever reported, and it drew international outrage.”