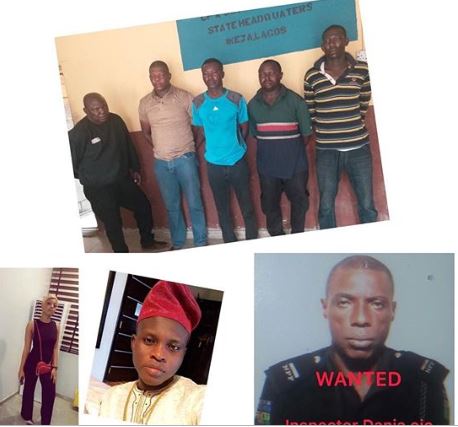 Lagos state commissioner of Police, Zubairu Muazu, has ordered the detention of Police Officers who opened fire on Ada Ifeanyi, 20, and her boyfriend, Emmanuel Akomafuwa, 32, at Akpiri Street, Olodi Apapa.

The police confirmed the arrest of the five officers said to have been involved in the crime that was committed on Saturday morning.

In a statement obtained by Naija News on Sanday, the Police said it has; “arrested (1) Inspector Adamu Usman (2) Sergeant Adeyeye Adeoye (3) Sergeant Kashim Tijani (4) Sergeant Lucky Akigbe and (5) Sergeant Paul Adeoye, while Inspector Dania Ojo who escaped immediately after the shooting incident is declared wanted by the Command.

Lagos State Police Command condemned, in total, these senseless killings of unarmed civilians by few ‘bad eggs ‘ in the Command, who are bent towards denting the image and reputation of the Nation’s Police Force. [Swipe to view graphic images.”

The Police said that the rifles of the officers had since been retrieved for forensic analysis by Ballisticians. If found wanting, they will be prosecuted in conventional Court for Murder.

This is coming after this news platform had reported how Emmanuel Akomafuwa and his girlfriend, Ada Ifeanyi were attacked alongside their friend who also drove in the same car with them.