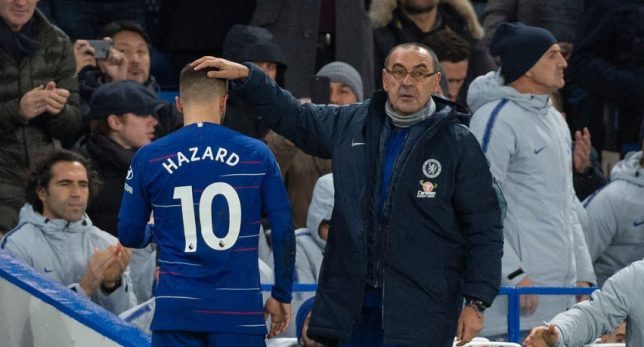 Chelsea Football Club manager Maurizio Sarri says it would be difficult for the English Premier League side to keep attacking midfielder, Eden Hazard.

The midfielder slalom through the opposition before scoring The Blues opener on the 24th minute on Monday night, sparking a reaction from West Ham supporters who replied with: “Eden Hazard,” they chanted at Stamford Bridge, “he’s off to Madrid.”

Reacting to the chants, Hazard told Sky News after the match that he has no intention of joining Madrid any time soon.

“They are wrong,” Hazard said. “Now I am just focused with Chelsea until the end of the season… We have still a lot to do and then we will see.”

This online news platform reports that Hazard’s feet are very much in west London for now but maybe not for much longer, given even Sarri accepts his brightest talent might be heading out of England.

While Hazard pushed back on the taunts of the West Ham fans about an imminent move to Spain but gave no long-term commitment, Sarri on the other hand, was more open about the difficulty retaining the 28-year-old Belgian International.

“If Eden wants to make another experience it is very difficult to keep him,” Sarri said. “We will try any way to convince him but it is not easy.”

When asked if Hazard could be worth 100 million pounds ($130 million), Sarri dismissed that as “too cheap.”