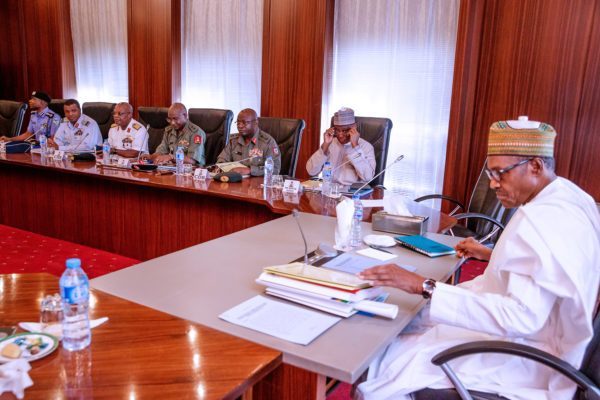 President Muhammadu Buhari is presently in a meeting behind closed doors with all service chiefs in the Country.

Naija News understands that the meeting started at the President’s office in the State House around 11 am.

Although the details of the meeting have not been revealed as the time of the report, there is high speculation that the discussions at the meeting would dwell on the security situation in the country.

It would specifically address the increasing banditry attacks in the North Western states, killings in Kaduna state and kidnapping in other parts of the country.

With the upsurge in banditry in Zamfara State, the Federal Government, apart from deploying special team and equipment, on Sunday linked the banditry to the illegal mining in the state.

In a statement on Tuesday, President Buhari had condemned the recent violence in Kaduna state, which led to the death of 20 members of the Adara community.

The meeting with the security chiefs was still in progress at the time of filing this report.