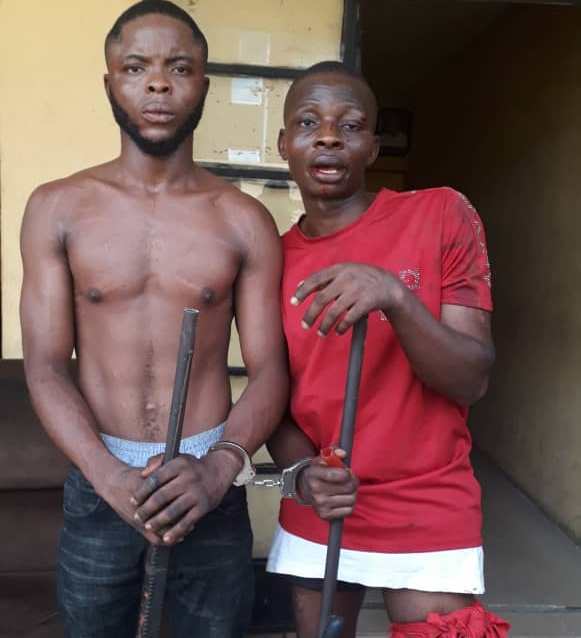 The Lagos state police command has unveiled the alleged abductors of the Lagos state fire service boss, Rasaki Musibau who was abducted alongside six others.

The Police command says it has already apprehended two persons who are allegedly connected to the abduction of Musibau.

The Police Public Relations Officer, Bala Elkana confirmed on Wednesday that two of the suspects had been arrested.

While confirming the arrest of the suspect, Elkana gave the names of the suspects as; Blessing Bayo, 29 years and Smart Alfred, 32 years.

He said two single barrel guns were recovered from the suspects, adding that investigations are still ongoing to apprehend the fleeing members of the gang.

“Following a sustained and well-coordinated operations by the Command’s Tactical teams led by the Officer in Charge of Anti Kidnapping Unit, SP Bulus R Musa, two members of the kidnapping gang that abducted the Director of Lagos State Fire Service, Rasaki Musibau and six others on 6/4/2019 at about 8.pm were arrested.

“The suspects namely, Blessing Bayo, 29 years and Smart Alfred, 32 years, all of Arogbo, Ondo State were arrested on 10/4/19 at about 0530 hrs, at Ibafun along Ikorodu- Ijebu Ode Express Way, a boundary community with Ogun State and they all confessed to the commission of the crime,” he said.

Naija News recalls that the abductors of Rasaki Musibau and the six others who were abducted on Saturday have regained freedom on Tuesday night.

The victims were released in about three days after their Saturday’s abduction.

Naija News also recalls that Musibau and seven others were abducted along the Itoikin-Epe road in Ikosi-Ejirin Local Council Development Area in the state.