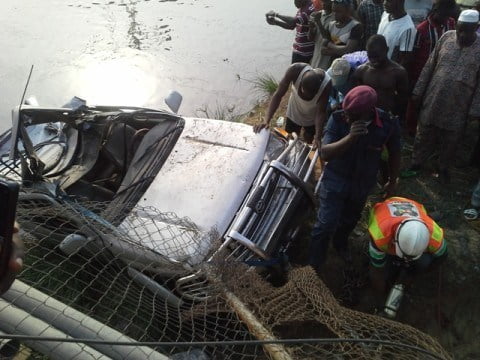 A middle-aged woman has been confirmed dead while her daughter has been left severely injured as her private Jeep plunged into the river on Ijebu-Ode/Benin Expressway.

Naija News reports that the unidentified woman and her daughter were travelling on the road in her Lexus Jeep with registration number JJJ 930 FL, when her car skidded off the road and plunged into the River.

The Public Relations Officer of the Ogun Traffic Compliance and Enforcement Corps (TRACE), Babatunde Akinbiyi, confirmed this to the to newsmen in Abeokuta, the Ogun state capital

He said the driver of the Lexus Jeep, with registration number JJJ 930 FL, a woman, lost control while on motion and plunged into the river near.

“I learnt the vehicle was coming from Lekki in Lagos to Ijebu-Ode when the accident happened.

“There were two occupants in the vehicle; the driver who is a woman and her daughter, who is a student of Tai Solarin University of Education (TASUED) in Ijebu Ode.

“The woman was taking her daughter back to school. As a result of excessive speeding, the woman lost control of the vehicle and plunged into the river.

“The driver, who is the woman and mother of the lady lost her life, while the daughter sustained injuries,” he said.

Akinbiyi said the ‎corpse had been deposited at Ijebu Ode General Hospital mortuary while the daughter was receiving treatment at same hospital.

He said the vehicle had been removed from the river and deposited at the Motor Traffic Division (MTD) in Odogbolu, Abeokuta.