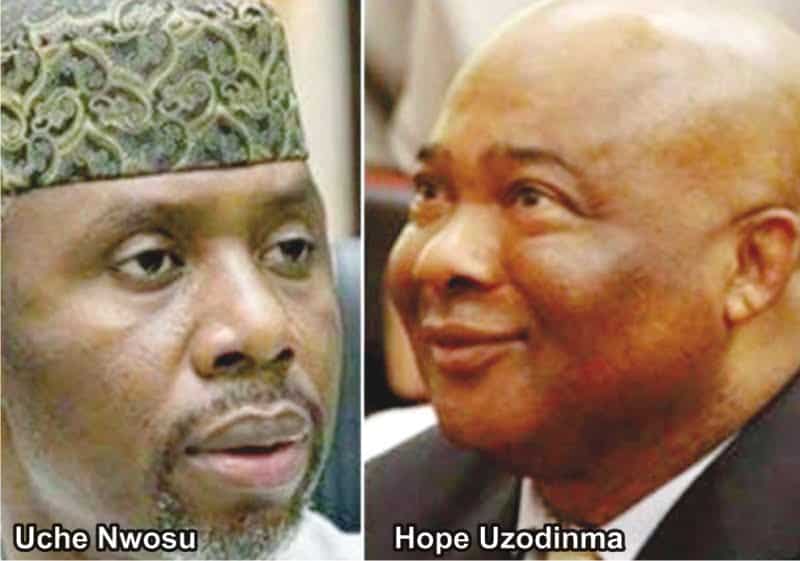 The governorship candidate of the APC in Imo State, Senator Hope Uzodinma, has said Governor Rochas Okorocha and his son-in-law, Uche Nwosu, do not have political value to win an election.

He was reacting to a statement credited to both Okorocha and his son-in-law that APC lost because Nwosu was not given the party’s ticket.

In a statement on Saturday by the Director of Media and Special Duties of his campaign, Declan Emelumba, Uzodinma said the statement from the duo confirmed that the destruction of the party was their primary concern.

He said: “It is truly pathetic that Okorocha and Nwosu are celebrating their defeat in the polls. Because of their evil infested minds, defeat for APC amounts to a victory for them.

“This crooked reasoning only goes to confirm what is already in public domain which is that he and his father-in-law set out from the beginning to destroy APC in Imo consequent upon which they colluded with the PDP to exclude the votes cast for the party in the elections, from the final collation.”

Uzodinma who described Uche Nwosu as a political infant insisted that he was no match to him in any electoral contest as he had won his senatorial elections back to back while the AA candidate has never won an election in his life and lost the only election he ever contested.

“Is it not curious that the man who was backed by an incumbent governor; a man whom the resources of Imo State was put on his behest; a man who shared one million naira per booth in the election still failed to win, yet they are celebrating their failure?”’ Senator Uzodinma asked.

The Senator representing Imo west senatorial district argued that in spite of intimidation and vote- buying, Uche Nwosu and his father-in-law could not procure victory because Imo people roundly rejected them.

“Why has Okorocha not received his Certificate of Return? Simple, they forced the returning officer to declare him winner. That is the only style Uche Nwosu and his father-in-law are used to. That was how they got the so-called House of Reps and House of Assembly seats. Even in Oru East, where I won with over 20,000 votes, how can anyone explain that the House of Assembly member could not win. But those results won’t stand”, he declared.

Uzodinma insisted that he remained the most popular candidate in the governorship election and that he won the election by a majority of votes cast.

He said he was confident that the tribunal will ensure that justice is done and shame those on a mission to destroy the APC in Imo State.