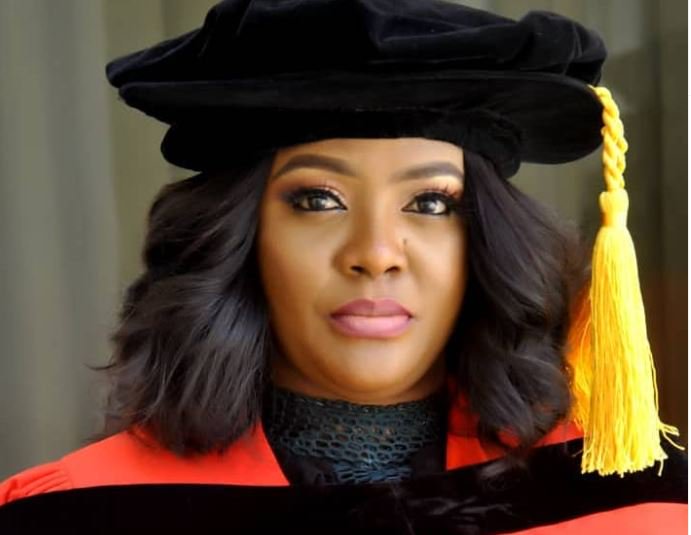 Popular Nigerian comedian, Helen Paul Has dedicated her recently bagged doctorate degree to her mother and went ahead to speak on how she came into life.

The Nigerian entertainer said she was born out of rape.

Naija News reports that the actress who made this known on who bagged a doctorate degree in Theatre Arts from the University of Lagos on Thursday wrote a note to her mother on her Instagram page.

According to her post, the comic actress said; “I HELEN PAUL dedicate this to my mum, you gave birth to me out of rape, they told you I wouldn’t amount to anything,” she wrote on Friday.

“I grew up hearing from family members; being called a “Bastard” and each time I asked you, you said ‘Olorun lon wo omo were, Olorun ma wo e‘ meaning God watches over the child of a mad person, he’d watch over you).

“Mummy I want you to know I love you, I might not buy you Benz now because I don’t have a `Pant’ yet but this certificate will amount to something great.

“They say Fame is nothing but Grace is everything and I pray for grace in everything I do.

“I’m not a Cele member but Late Oshofa gave me the name and everything Late Oshofa said about Helen Paul is coming to pass.

“I dedicate this to every mother, may God make you strong enough to survive and enjoy the fruit of your labour.”

With these feet, Helen Paul seems to be the first stand-up comedian to have a PhD. She has worked as both a freelance and full-time presenter at several media houses in Nigeria; She broke out as “Tatafo” of Radio Continental 102.3FM, where she featured on a programme “Wetin Dey.” She presently hosts ‘Jara’ on Africa Magic.