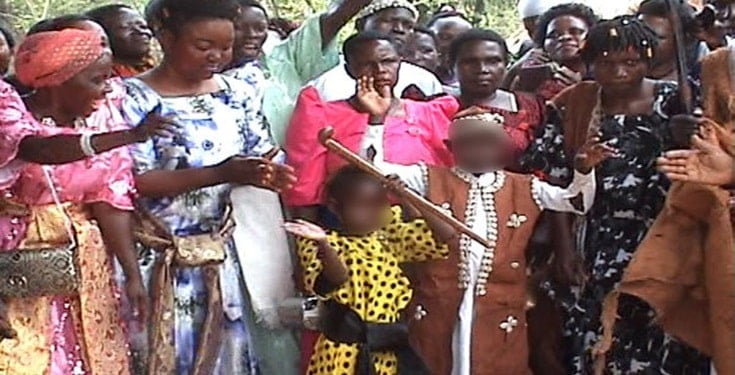 A nine-year-old boy (name withheld) has decided to spend his entire life on earth with his six-year-old lover.

The boy married his wife after their five years relationship.

The primary four pupil at Buyende Light Primary School and the girl were given a ‘matrimonial hut’ to live in as a couple.

Until their marriage, the boy was said to have been dating his wife for five years. The two started dating when the boy was three years old while the girl was three months old. after they were allegedly born with ‘two teeth’.

According to the girl’s mother, the girl started speaking immediately after birth.

“She started speaking immediately after birth! When I went into labour, I asked what baby it was and I was told it was a girl. However, the midwife stunned me when she said my baby had been born with two teeth and nearly dropped her,” the girl’s mother.

The boy’s teacher described the 6-year old husband as a disciplined boy in school.

“I think this is the Kintu our forefathers talked about (in ancestral history). This one advises me despite being his teacher,’’ said the teacher.

The police in Uganda said the wedding was under investigation as it described it as an unusual wedding.

while confirming the incident, the Police says investigating the incidence, which goes against the law of the land where marriage can only happen between people aged 18 and above.

“Any acts of marriage must be between people who are 18 years old and above. Below that, you cannot marry. We want to find out the real facts of what it is all about,” said Busoga North Regional police spokesperson, Mr Michael Kasadha.