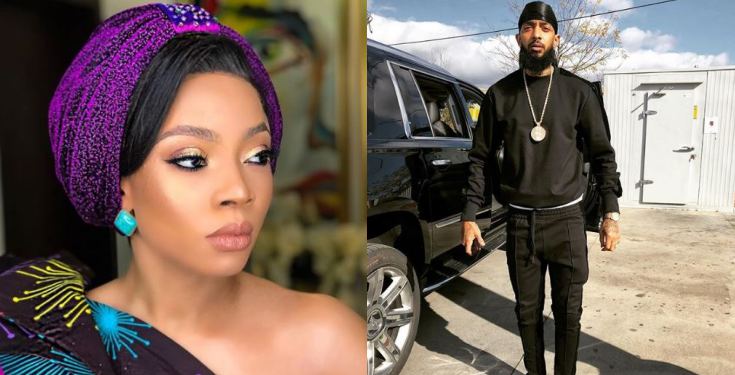 Nigerians have continued to express their anger with Toke Makinwa for mourning Us Rapper, Nipsey Hussle.

Naija News understands that the anger of Nigerians was not because Toke mourned the rapper but that she mourned the rapper at a time the country is mourning the death of Kolade Johnson who was killed unjustly by some officials of the Special Anti-Robbery Squad (SARS) of the Nigerian Police.

Recall that the Grammy-nominated rapper, Nipsey Hussle was shot and killed outside his clothing store in south Los Angeles on Sunday, March 31 .

His death sent shock throughout the world, as celebrities were reportedly the pictures of the deceased rapper in memories of him.

Media personality, Toke Makinwa who joined the world to mourn US Rapper Nipsey, pen down an emotional tribute to the slain rapper.

However, Toke’s tribute seems not to go well with Nigerians as some Nigerians were upset and wondered why she can’t use her influence to condemn Kolade Johnson’s brutal murder by SARS.

What is in this life? You struggle thru it all and just when you find your soulmate, just as you are about to begin to really reap the benefits of the life you both dreamed of, you lose him to the cold hands of death? If you love someone, let them know today, hug them, kiss them, hold on to them and speak all that’s in your heart to them cos you never know if it’ll be the last chance you’ll get to say all you want to and nothing hurts more than the words we left unsaid. Tomorrow is not guaranteed people…So sad ? If you don’t love someone, let them go too, let them have a fair chance at finding their own love. Life is too short