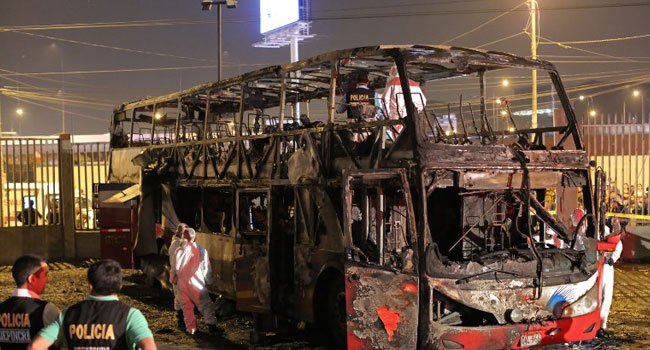 An inferno gut through a bus at an illegal transport terminal in Lima, killing 17 people who were trapped in the inferno that occurred in Peru.

Naija News reports that the state prosecutor’s office has on Monday, April 1, revealed that the inferno disaster becomes one of Peru’s worst fire disasters in over a decade.

The fire chief in the area, Mario Casaretto told this news platform that most of the victims were trapped on the upper deck of the interprovincial bus in Lima as it prepared to depart the controversial Fiori terminal.

“Everyone became trapped in the stairwell leading to the first level when they wanted to get down from the upper level,” Casaretto said.

A resident who witnessed the incident, Jose Alberto Olivos told local television that he had lost six family members including his wife, children and grandchildren.

“The car was burning, so I ran up and the people, seeing that it was burning, were coming down and I wasn’t able to save my family,” he said.

Initial reports said an electrical fault at the rear of the bus triggered the blaze just after 7:30 pm (0030 GMT), while a mayor suggested that the bus was carrying fuel on the upper deck, where the blaze is reported to have started from.

As at the time of filing this report, the driver of the bus and his assistant were in the police custody for questioning to explain the facts behind the incident.