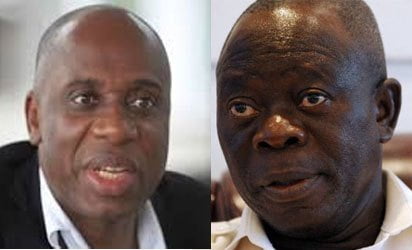 The All Progressives Congress (APC) has dismissed reports of disagreement between its National Chairman, Adams Oshiomhole and Minister of Transportation, Rotimi Amaechi.

The duo were reported to have had a disagreement over the alignment of the Rivers State APC with the governorship candidate of the African Action Congress (AAC), Awara Biokpomabo.

In a statement on Monday night, APC National Publicity Secretary, Lanre Issa-Onilu, said it was regrettable that Oshiomhole’s statement was being twisted to suit a jaundiced narrative.

“This narrative is at best, mischievous, pedestrian and should be disregarded”, he noted.

“The APC Chairman’s statement is unambiguous as to the effect that the APC’s National Working Committee (NWC) does not have any formal alliance with AAC. This is without prejudice to any local arrangement that may exist.

“Both Oshiomhole and Amaechi are above the petty insinuations being orchestrated by a section of the media.

“Like many leaders of the party, APC National Chairman, Comrade Oshiomhole and the Minister of Transport, Hon. Amaechi enjoy a cordial relationship and do share mutual respect; therefore, deliberate misinterpretation of issues and statements from the party or between the two of them would continue to fail”.