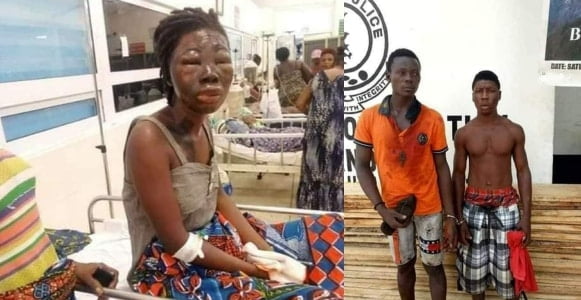 An unidentified but Nigerian lady has lost her sight after she was attacked, robbed, raped and maltreated on her way home from school.

Naija News reports that the Nigerian Lady was attacked by the set of hoodlums while she was returning from school where she had gone to attend her lectures.

The attackers were said to have accosted their victim, ordered her to submit her bag containing her monies, her phone and recharge voucher cards she sells to compliment the payment of her school fees and to make a livelihood.

The victim who was shocked by the appearance of her attackers took to her heels but eventually gave up at a point her legs could no longer bear her race.

It was learnt that the attackers caught up with their victim, collected the bag from her, repeatedly molested her in their numbers and emptied a can containing acid on her face.

This news platform understands that the robbers decided to pour acid on their victim’s face so that she won’t be able to recognise them in future.

Unfortunately, passersby came to the rescue of the lady, arrested the perpetrators of the crime and handed them over to the police.

An eyewitness identified as Mj West Provocateur who shared the incident on Facebook wrote; “The image seen here, (the victim is Adetutu. she’s a student but also sell recharge cards to meet up her school needs, according to her, her mother doesn’t have enough money to pay,

However these two guys stopped her along the road, on her way home and ask for her bag, she refused to give them because her money and recharge cards were in it, and they tried to forced her, she ran away, but unfortunately for her there was no one to assist her, finally the guys got her, raped her, collected her bag, and poured acid on her so that she won’t be able to identify them, God being good they were caught while running away, they are now in police custody now. Doctor confirmed that Adetutu can’t see again because the acid has got into her eye balls, what a pity Adetutu lost her sight!!!.”