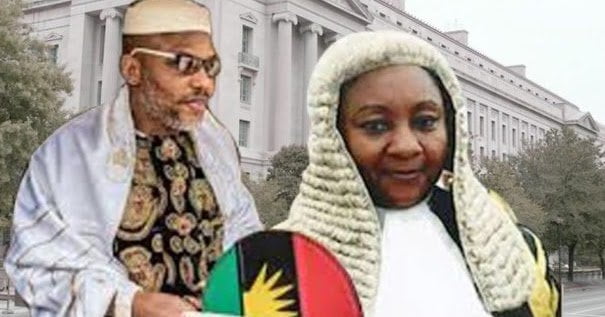 The leader of the Indigenous People of Biafra (IPOB), Nnamdi Kanu, has question Justice Binta Nyako for revoking his bail without “first investigating” what led to his disappearance.

Naija News reports that Kanu who resurfaced in Jerusalem, Israel, October 19 2018, after the military invasion of his community in Abia State, southeast Nigeria, in 2017, made this comment in reaction to the court order revoking his bail as well as ordering his arrest.

This online news platform had reported earlier that a Federal High Court presided over by Justice Nyako in Abuja, Nigeria’s capital, revoked Kanu’s bail on Thursday and also ordered his immediate arrest.

Reacting to the court order in a live broadcast on Radio Biafra on Thursday night monitored by Naija News, Kanu said Justice Nyako committed “travesty of justice” for revoking his bail.

Kanu stressed that Justice Nyako refused to entertain all the applications brought to her court over the attack and massacre in his home.

The IPOB leader, therefore, called on the judge to “stepdown of my case or be ready to be disgraced”.

“How can a Judge revoke my bail without first investigating what led to my disappearance? Binta Nyako refused to entertain all the applications brought to her Court over the attack and massacre in my home.

“If you know Binta Nyako, ask her why the issue surrounding the army barricading my house was swept under the carpet.

“Travesty of justice is what Binta Nyako has just committed, she either stepdown of my case or be ready to be disgraced,” Kanu vowed.